There's been no shortage of forces pushing and pulling on the price of gold over the past week. 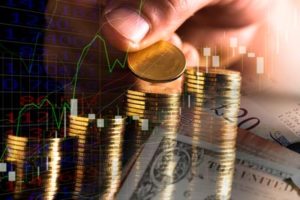 Gold gave up most of the gains it managed to tack on in the previous week. The bulk of that weakness came on Tuesday, as traders were preparing for the Fed's January meeting minutes due out Wednesday.

Then came Wednesday, and gold put on a brave rally in response to the Fed, but quickly reversed to end the day.

Some Fed Open Market Committee members see economic growth accelerating faster than they did at their previous meeting. That caused the Dow to pop - along with gold prices - initially.

But then traders digested that and became concerned it could cause the Fed to raise rates faster than expected, perhaps hiking rates four times rather than three this year.

Bonds sold off, pushing the 10-year yield to near 3%, a level not seen since late 2013. In response, stocks sold off and gold joined them, losing a few dollars on the day.

But what's been striking is gold's quiet resilience in the face of a bouncing dollar and rising yields.

I think this year will mark a clear resumption to rallying gold prices, and after we recap last week's gold price performance, I'll show you exactly why...

Why the Price of Gold Moved Last Week

After the quiet trading day for gold on President's Day (Feb. 19), the precious metal followed up with weakness as traders turned their attention to the next set big catalyst: the Fed minutes.

On Tuesday, Feb. 20, the U.S. Dollar Index (DXY) enjoyed a early morning rally, perhaps in anticipation of news that the Fed may be more hawkish on rates.

Wednesday (Feb. 21) was the day FOMC meeting minutes were released. And like I detailed above, the minutes showed Fed officials were anticipating higher-than-expected economic growth. But faster economic growth could mean quicker rate hikes and higher bond yields, which compete with gold.

Check out how the dollar spiked on Wednesday after the minutes were released... 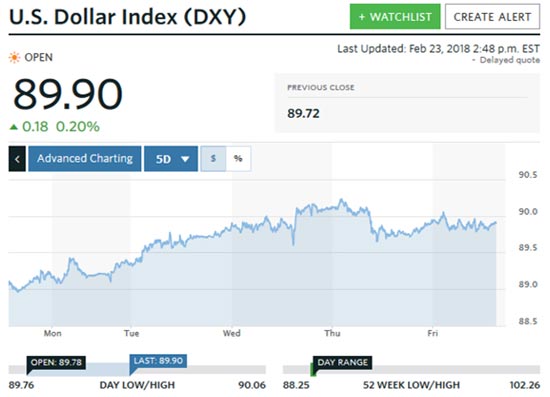 Gold would suffer a bit more weakness overnight Wednesday into Thursday, as the DXY bounced above 90 and stayed there until just before 9:00 a.m. The DXY then sold off to around 89.75, allowing gold to regain some strength. The precious metal opened at $1,323, then rallied throughout the day to reach $1,331 by the 5:00 p.m. close.

And finally, to end the trading week, gold pulled back once again as the DXY made another run for 90 but hovered for most of the day around 89.9. Gold moved sideways, opening at $1,330, and by late afternoon, it was still trading at that level.

While gold prices showed some signs of weakness, they've actually held up better than expected. That's giving me more reason to expect a gold price rally this year.

How High Gold Prices Will Rise in 2018