Despite what the mainstream media are saying, North Korea is less likely than ever to hold diplomatic talks with the United States.

That's because the very diplomat who would "talk" to the Hermit Regime's dictator, Kim Jong Un - or any of his proxy ambassadors, for that matter - just announced his resignation.

And this fact alone suggests North Korea now presents twice the threat to Uncle Sam that it did yesterday.

Fortunately for you, this elevated threat level can mean fast, reliable profits - if you play it right.

See how you could double your money by 2019 - as well as who's responsible for making North Korea more dangerous to the United States than ever before - right here... 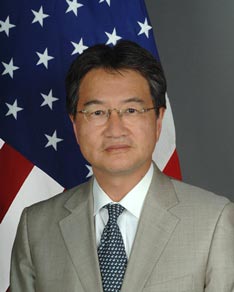 Without warning this morning, the State Department's top diplomat in charge of North Korean policy told CNN that he will be retiring from his job...

"It was completely my decision to retire at this time," Yun told CNN, who then cited "personal reasons" as rationale for his departure.

Yun joined the State Department in 1985 and has served as head of the political division in the U.S. Embassy in Seoul since the early 2000s.

The ramifications of Yun's loss are dire indeed...

First of all, his absence alone will leave yet a gaping hole in Washington's staffing on Korean issues. The Trump administration has not yet nominated an ambassador to South Korea, and the State Department does not have a confirmed assistant secretary for East Asian and Pacific Affairs, either.

Yun is also the sole person in the State Department who's actually spoken directly with North Korean diplomats. And last June, it was Yun who went to Pyongyang to collect Otto Warmbier, the University of Virginia student who had been detained in North Korea for 17 months.

Yun brought Warmbier back to the United States on a medical evacuation flight. The 22-year-old died six days later.

During that trip to Pyongyang, Yun was able to see the three other Americans being detained in North Korea. That was the last time the three men have been seen or heard from.

With Yun absent, the fates of these three American captives become even more dubious.

Finally, Yun has long been a strong proponent of diplomatic talks.

His absence could therefore tip the White House scales in favor of military action by default.

Or at least, it could appear to North Korea that way, bringing its tentative offerings of diplomacy to a swift end.

North Korean Gen. Kim Yong Chol told South Korean President Moon Jae In just this past Sunday that Pyongyang is willing to talk to the United States, but with Yun out of the picture, this seems less likely.

Especially since all options - including the use of military force - remain on the table.

U.S. Vice President Mike Pence stated as much on Feb. 11, when he professed that the United States is ready to talk, but that "no pressure comes off until they are actually doing something that the alliance believes represents a meaningful step toward denuclearization," reported The Washington Post that day.

"So the maximum pressure campaign is going to continue and intensify," Pence added.

That means now's as a good time as ever for investors to pick up a defense stock - before any hint of actual military action rears its head.

And this company could double your money by 2019...

A World Leader in Military and Defenese

Lockheed Martin Corp. (NYSE: LMT) is one of the world's premier defense contractors.

Because the constant threats of war, terrorism, and other conflicts are virtually never-ending, there will always be demand for defense companies like Lockheed Martin.

And Lockheed is one of the world's leading companies in supplying defense products to governments and organizations across the world.

Lockheed's stock performed exceptionally in 2017, with a nearly 32% gain.

But we expect it to more than double by 2019 because of strong demand for its cutting-edge military jets. Not to mention the continued tensions with North Korea, now exacerbated by Yun's departure.

...Because it only takes 10 minutes to set yourself up to make more money from the markets than you've ever seen in your life.

A year from now, you could be looking back at this moment as the defining event of your financial future. The first step on your road to millions starts right here.