Looking at bold cryptocurrency predictions around the industry, we found one for Ripple prices: $16 by the end of December 2018.

Samson Williams, the CSO of an Ireland-based fintech firm, projects the price of Ripple will skyrocket 1,620% from its current price of $0.93, according to Finder.com. 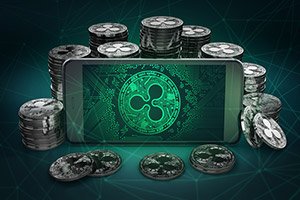 He calls it a "child of banks" and says that it would get a natural bump from a recession in 2018.

In other crypto news, the bumpy ride that sent the overall market value of cryptocurrencies to $276 billion seems to be ending.

Crypto coins are roaring back from February lows, pushing the market above $461 billion in value.

Below is a recap of the top cryptocurrency prices at 3:45 p.m. EST.

On Thursday, the market capitalization of the global cryptocurrency sector hit $461.3 billion. The top performer in the space was Particl (PART), which gained more than 26.5% on the day.

The price of Bitcoin hovered just below $11,000 on Thursday as the market capitalization ticked to $186.4 billion.

Bitcoin is still shaking off statements by billionaire and Microsoft Corp. (Nasdaq: MSFT) founder Bill Gates, who argued that cryptocurrencies are too risky for investors.

Gates said that the anonymous nature of Bitcoin makes it a fine instrument for money laundering, tax evasion, terrorist funding, and the purchasing of drugs.

The Overstock.com Inc. (Nasdaq: OSTK) stock price plunged more than 8% this morning after the company reported that the SEC is investigating its latest cryptocurrency project, tZero.

While there don't appear to be any specific legal issues at the moment, the company noted that there could be a broader impact on the company's plans and any other organization that is seeking to raise capital through initial coin offerings.

Last week, we noted that Bank of America Corp. (NYSE: BAC) listed cryptocurrencies as a potential business threat in its government filings.

This was important, because so many banks had largely dismissed the impact of cryptocurrency and blockchain technology heading into the New Year.

It turns out that many regional banks are now taking a page from BAC's playbook.

WesBanco Inc. (Nasdaq: WSBC), a regional firm with a focus across the Rust Belt, wrote in its latest 10-k report that cryptocurrencies could compete against them in payment system technologies.

"Banks and other financial institutions may have products and services not offered by WesBanco such as new payment system technologies and cryptocurrency, which may cause current and potential customers to choose those institutions," the report states.

"Looking ahead, this could be a major trend as more reports trickle out of corporate board rooms. The banks are on high alert.

Click here to learn more about Tom's system - and see the No. 1 cryptocurrency he's buying right now on camera!

Thank you once again or a wonderful article. As a fairly new investor. I have found these articles profoundly useful. And I must be doing something right as I had those Co's. on my radar and if the funds and tech's are, "Good To Go", so am I.

Please advise why you think Ripple will hit $16 by end of 2018.
What would cause it to become that popular?
Please advise reasons when you make big predictions as Cryptos more often than not fail dismally