The marijuana sector is still a volatile market, but with California now "fully legal" and Canada headed that way this summer, there are billions on the table; far too much upside for any investor to ignore.

But with such a massive amount of profit potential, it's all too easy for investors to be tempted by the hype and take the "high-risk" route.

That's why the "conservative-aggressive" approach is the one I recommend for getting started: Target low-risk companies - blue chips, in many cases - that are enabling the broader pot stock sector to flourish.

These easy-to-own companies are the best way to get started on the road to "marijuana millions." They're the perfect base on which to build a legal cannabis portfolio.

I recommended this stock way back in March 2014, and even back then, it was a leader in biotechnology. I still consider it to be one of the best cannabis tech plays available today.

Founded in 1998, GW Pharmaceuticals Plc. (Nasdaq ADR: GWPH) is the global leader in the development of plant-based cannabinoid therapeutics. The company is partnering with a couple of the world's largest publicly traded drug firms and stands to gain more than $300 million in revenue from those alliances alone.

And better yet, it is a big play on the cannabis industry because of the company's robust pipeline, which includes several drugs that utilize the science behind cannabinoids.

GW Pharmaceuticals is focused on the huge potential behind the more than 65 types of these cannabinoid compounds already discovered.

The two most abundant are tetrahydrocannabinol (THC) and cannabidiol (CBD). GW Pharmaceuticals uses both, but in very different ways.

Fact is, the company's main product candidate, Sativex, has awesome potential to treat patients with pain from cancer as well as those with a condition known as MS spasticity, which results in muscle spasms and stiffness associated with the diseases multiple sclerosis.

Sativex treats these conditions by allowing THC, CBD, and a naturally occurring chemical called anandamide to bind to receptors in the brain.

Meantime, GW Pharmaceuticals is also teaming with some heavy hitters in the pharmaceutical industry to help fund the development of Sativex.

The rest of the company's pipeline also shows great promise.

It has a product candidate called Epidiolex to treat rare types of epilepsy in children. The key here is that GW's compound actively negates the euphoric and cognitive effects of THC when administered to children.

Epidiolex is proposed to treat conditions that are estimated to afflict around 95,000 cases in the United States and some 150,000 more in Europe, including children with Dravet syndrome, a rare form of infant epilepsy.

Some of GW Pharmaceuticals' additional candidates aim to treat type 2 diabetes and schizophrenia and have already entered phase 2 trials.

I recommended Microsoft Corp. (Nasdaq: MSFT) as a pot play in August 2017 because many pot entrepreneurs lack the knowledge and experience necessary to comply with all state and local regulations, from employment and labor laws, to inventory control, and everything in between. 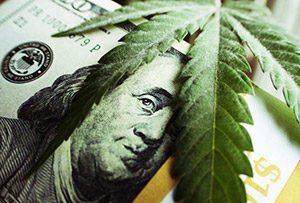 With a market likely to top $35 billion in three years, the stakes are just too high to leave anything to chance.

Entrepreneurs are turning in droves to the one company that can make it all easy for them...

That's why I love Microsoft Corp. (Nasdaq: MSFT) in this space.

Microsoft has marketed its cloud-based services heavily to players in the sector, and it's beginning to pay off.

Here's where California's recreational weed market comes in. Now, its medical marijuana market alone accounts for some 33% of all legal sales in the United States.

Conservative estimates suggest California's new market will be worth $1.57 billion in the first year after legalization, before it triples by the early 2020s.

And all the state's vendors are going to need the product that Microsoft is laser-focused on right now.

This is a huge profit catalyst for "Mr. Softy" that really makes the case for owning it now.

While Microsoft has yet to match Amazon dollar for dollar in this fast-growing tech segment, its recent track record has gotten Wall Street's attention.

That means now is the time to "Accumulate" a bigger position. I think the near 30% in gains Microsoft has given us in the meantime are just the start.

This last "safe" weed play was recommended in September 2017, and the reason should be pretty clear.

This is seriously labor- and tech-intensive stuff. It's also the specialty of Scotts Miracle-Gro Co. (NYSE: SMG).

While the legalization of marijuana is creating the need for acres and acres of professionally grown cannabis, you shouldn't forget the little guys. After all, for decades thousands of consumers have been growing their own, even while risking trouble with law enforcement. By one estimate, $60 billion worth of illegal pot is grown each year in the United States.

But with marijuana now legal in 29 states and counting, the number of people looking to cultivate it for their own consumption is likely to skyrocket.

And while this opens up an opportunity for firms that cater to growers and gardeners, it also presents those firms with a strategic dilemma. Should they establish a strong early presence in the pot-growing community? Or wait until the social climate around cannabis normalizes - that is, until growing your own pot is no more controversial than brewing your own beer?

Scotts is going with the first option: embrace this fast-growing community of growers and, by doing so, "plant the seeds" for robust new paths to growth.

Scotts is already the world's largest maker of lawn care and gardening products and is now making a big push into indoor plant cultivation, as evidenced by its April 2015 purchase of General Hydroponics.

This method means no mess and, more importantly, no pesticides. That's a key consideration for green consumers.

Now, given the admittedly unsettled legal landscape around cannabis, Scotts' emphasis on that market might seem like a dangerous choice.

But in truth, it's less risky than it seems.

If the legal marijuana movement stalls, Scotts will still benefit from the growing demand for hydroponic equipment among young urban consumers eager to grow the herbs and greens that go into their salads.

But it's hard to imagine the push for legal marijuana stalling out. In many respects, that genie has left the bottle.

Even before legal pot made this new growth potential possible, hydroponics had been very popular with a whole array of growers.

If other countries follow the lead set by the United States, pot cultivation - and hydroponics - could well soar much higher than that.

Additionally, Scotts' four leading brands (Scotts, Miracle-Gro, Roundup, and Ortho) have a commanding position, with market shares ranging from 53% to 70%.

And the firm is out to make it easy for people to start using hydroponics equipment to grow either cannabis or food. Scotts Miracle-Gro has 2,500 sales associates that it sends to visit retail stores after training them on the merits of hydroponics.

Make no mistake: This is not your typical cannabis investment. For one thing, Scotts is already quite popular with mutual fund managers, who like the fact that the firm has boosted its dividend for seven straight years. It's given us peak gains of more than 13%, and I see its recent retreat as an opportunity to buy more and build an even bigger position.

Scotts is the clear choice to anchor the low-risk end of the spectrum. And its early move to embrace the cannabis community could help turn it into a robust grower.

These Tiny Pot Stocks Could Skyrocket: In a recent interview, marijuana stocks expert Michael Robinson shared his insight on California's total cannabis legalization and delivered details on the huge gains you could have the chance to enjoy. Get the top three marijuana stocks he's watching now - and learn how to position yourself to profit - by clicking here.

What are the Marijuana stocks to invest in Australia ???

I want to learn as much as I can about this stock. I alway thought it would be a great stock option. So its 111. a share?