As I've mentioned before, right now we are caught between the "Scylla and Charybdis" of two very different market narratives: the outgoing "Trump Growth" and incoming "Great Unwind."

The markets behave differently depending on which narrative has the upper hand, and last week's wild trading put that tension front and center.

The answers to two important questions tell us which particular narrative is exerting the most influence and, most importantly, shows us how to trade.

In the "Great Unwind" Federal Reserve-driven narrative, the opposite is true. Good economic news will be bad for the market (because it signifies quicker or bigger action by the Fed), and bad economic news is good because this will push Fed tightening actions further back.

Right now, we are in a "blended" narrative where... all of the above applies.

Fortunately, this also offers us some unique opportunities to profit...

Fed Fear Had the Upper Hand Last Week... but Trump Also Played a Part in the Sell-Off 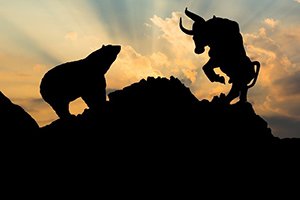 Some of last week's knee-jerk selling was triggered by the thought that the Fed's Open Market Committee (FOMC) was going to tighten targeted interest rates. This was such a fear that traders just hit the "Sell!" button, sending the United States' leading indexes down for the count and sending markets reeling around the globe.

The new "Fed fear" is a very heady, potent brew, that's for sure.

Then traders went into a further panic on the thought that President Trump was going to unilaterally slap a series of tariffs on imported steel and aluminum sending the market further down. (Negative Trump or economic news is clearly still a powerful force - so the old narrative has a lot of life in it yet!)

But I'm looking for all of these jitters to even out in the short term.

First, we all know that the FOMC is going to raise its target for Fed funds from the current range of 1.25 to 1.50% in three expected moves, which likely by year end will result in a target of 2% to 2.25%. And even if we get a fourth hike, the worst we're looking at a rate of 2.50% or so - hardly a tight monetary market.

Moreover, folks are missing the reality that the Fed is looking at the more accurate measure of inflation in the Personal Consumption Expenditure (PCE) index, which was released this week for January with core rate of only +0.3%, or only 1.5% for the trailing year.

This is way below the Fed's stated target rate of under 2.0%. So there's no imminent pressure to hit the hike button in the immediate future.

So that "Fed fear" angst should cool off fairly quickly when investors (and markets) have regained their heads.

Moreover, the Trump Growth narrative that's spinning around the steel and aluminum tariff issue right now should also calm down quite soon.

With a president known for a pragmatic approach to business and who's generally receptive to input from the business community, all it will take to kill this idea is a few sit-downs with the auto industry and other manufacturers in the United States that will be hit hard by the import taxes.

Otherwise, countless jobs will be lost with soaring input costs, and sales will fall like rocks with higher consumer prices - all bad news for the economy.

In fact, just one industry - the can business for food and beverages - provides over 20,000 manufacturing jobs and countless others in related businesses.

According to industry leaders, including Century Aluminum Co. (Nasdaq: CENX) CEO Michael Bless, many of those jobs will be in jeopardy with the new taxes. And then there's the reciprocal tariff reactions from other nations that would definitely hit the billions of dollars' worth of U.S. agricultural exports with further jobs in jeopardy.

The tariffs likely won't get off the ground, and this particular wave of Trump-driven market hysteria should soon settle back to normal.

Fortunately, this setup is a very profitable one! We have to pivot from our usual bullish bias to be receptive to moneymaking opportunities that arise when the market takes a short-term tumble.

We will continue to see spikes of fear as the new narrative comes in - but thanks to the can't-kill-it nature of the Trump Growth narrative, we should see plenty of quick bounces back, since the underlying economy remains very good.

And there's reason to be optimistic long-term, too - and not abandon that bullish bias that's made my paid-up subscribers dozens upon dozens of double- and triple-digit profit opportunities over the past 18 months.

The fourth quarter's revised GDP number came in this week at 2.5% and 2.3% for all of 2017 - which is much better than 2016's number of only 1.5%. And all projections for this year show that growth should be expected to continue, if not rise, thanks in part to the massive tax cuts for businesses and individuals.

For us, that means we'll have lots more opportunities in vehicles like Powershares QQQ Trust S I (ETF) (Nasdaq: QQQ) as we buy on a pullback and cash in on the inevitable bounce. I'll be in touch with my paid-up subscribers with some specific instructions on how and when to play this.

Note: D.R. e-mails trade recommendations to every single one of his subscribers when he finds the perfect opportunities.