Cybersecurity pioneer and cryptocurrency savant John McAfee can move the altcoin market with one simple tweet.

And he started doing just that in mid-December 2017. That's when McAfee announced his "one coin every day" challenge. The criteria for a McAfee altcoin shout-out: The digital asset should be capable of "changing the world."

Altcoins are tinier than their more popular counterparts, like Bitcoin, Ethereum, and Litecoin... 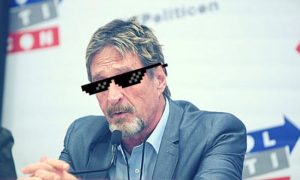 They are, in effect, the penny stocks of the crypto world.

So most of McAfee's altcoin recs were of digital assets never before seen or heard of - each worth less than a penny.

But once the antivirus software forerunner gave them a little public love, their miniscule values took off.

On Dec. 15, McAfee claimed via tweet that an altcoin called SAFEX constituted "the majority of [his] holdings." 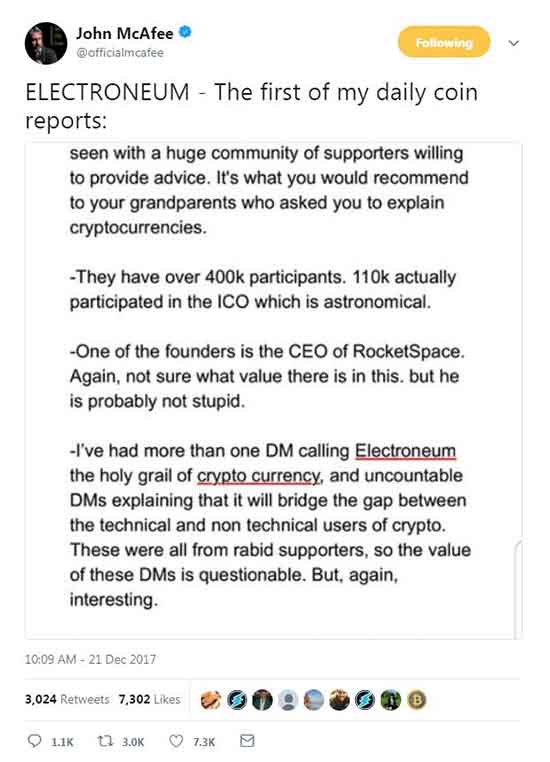 Now, however, Electroneum sits even lower than before its McAfee-inspired heyday - at $0.06.

If anything, these altcoin price movements show how volatile the nascent digital coin landscape can be.

On Jan. 10, Motherboard reported that McAfee himself is "acutely aware of the market chaos his tweets can sow, and attribute[s] it to automated trading bots working off of his advice."

Indeed, the prevalence of these automated trading programs - programs that monitor and exploit cryptocurrency price fluctuations, oftentimes exacerbating dips and surges - prompted McAfee to reduce his altcoin promotion from one coin per day to one per week on Dec. 26.

But he's still at it - almost three months later.

In a half-apology to altcoin investors who'd bought into McAfee's promoted coins at just the wrong moment, the crypto wizard told Motherboard, "I'm very sorry for the people who buy in at the top of the spike - yeah, you're going to be pissed off. But if you're smart, wait and let the chaos happen and then buy in."

We've got a better idea than that.

For readers looking to make smart, profitable cryptocurrency moves, we suggest giving this a try...

The "Buy" Signal Is Flashing on This Crypto Trade

Now he's seeing the "Buy" signal on a cryptocurrency trade he thinks could turn a small stake into more than $40,000, based on his analysis.

In a special video presentation, Tom walks you through the process for placing this crypto trade. You'll get the name of the coin, watch Tom make the trade, and get all the key details - at no cost, and in under three minutes.

He's expecting this little-known coin's price to surge very soon - and everyone holding it beforehand could see massive profits. Everyone else... they may have to miss out.

Click here now to see Tom's presentation and get his crypto recommendation for free...

There is no such presentation that last 3 minutes Why not give us the written information also !