The stock market correction that kicked off February served as a wakeup call for investors.

Maybe your pulse quickened when you saw your retirement funds take a hit.

Or maybe you clenched your teeth and rode it out even as the Dow tumbled more than 1,000 points on Feb. 8. 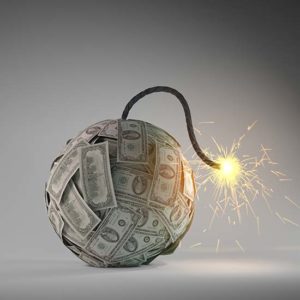 Either way, the quick pullback served as a reminder that this nine-year-long bull market could come tumbling down at a moment's notice.

After all, the bull market officially began on March 9, 2009, and stocks have been humming higher ever since. In just six more months, this will become the longest bull market in stock market history.

But we all know bull markets end...

The market will pull back at least 20% eventually, signifying the beginning of a new bear market. The talking heads on TV will chatter about stocks in the red. Congress will hold hearings on how to "stimulate" the economy. Maybe your neighbor loses their job.

We aren't just on the eve of another stock market crash or recession.

It's much more dire than that.

We are staring down a Great Reckoning...

How to Protect Yourself from the Coming Crisis

America never recovered from the Great Recession. And an economic event of such magnitude is about to occur that will irreparably fracture America as we know it.

No one will admit that this future is rapidly approaching.

We were told by the media, by all the talking heads, that the so-called "economic recovery" since the 2008 financial crisis was a success.

But what kind of recovery leaves 48% of Americans living in danger of poverty?

A recovery where kids no longer grow up, get jobs, and get married.

Where, according to the U.S. Census Bureau, more Americans age 18 to 34 live with their parents than with a spouse.

What kind of recovery makes it so almost 60% of Americans can't even cover a $500 emergency expense?

The economic recovery - supposedly driven by market gains - is as flimsy as a stage prop.

Experts on both sides of the aisle agree that a crash is coming... likely a big one.

But they don't understand just how big...

Because they're not taking into account the false recovery.

And if we crash from that true level, it will be so much bigger than people expect.

We are long overdue for another crash of epic proportions...

Only this time, we won't be crashing from the heights of a thriving economy.

We'll be crashing from the true lows.

Which means, if you want to protect yourself and your family, there is no place for fear, panic, or mistakes.

I just lost my job.And so it is imperative that we make some real money so that I can buy into all of the different memberships. I only have so much money to work with. So after I make some purchases. I won’t leave anything for the membership. I know that when I’m able to get all of the memberships we will be able to really knock it out of the park.

True, many stocks are overvalued today, however many very solid companies are not. Companies are making large profits, so the market value goes up with earnings and future projections based on market share and demand. The market is doing very well because investors are making money when the stock go up and when they go down. The market has changed forever as the large insiders have finally learned they do not need to crash the market to make real good money. Over many decades, even ignorant people learn. A lot of traders have made a ton of money this year, including February.