Green energy stocks aren't just shares of environmentally healthy companies, they are potentially some of the most lucrative stocks you can own.

The simple fact is the world needs energy, and renewable energy - or "green energy" - is essential to meeting global demands. But as green energy becomes more competitive with traditional fossil fuels, its potential grows even more. 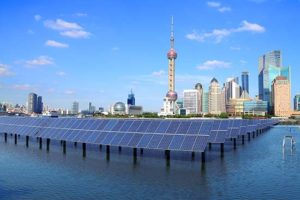 The groundbreaking technology in solar and wind energy is staggering, and investors can still get in on these alternative energy stocks early.

Just look at what's going on in China.

China is already the worlds' largest solar energy producer, but its growth potential from here is still incredible. One research firm projects China's solar industry can grow another 700% by 2040.

With that sort of growth still ahead for the renewable energy industry, you can still get in early on the best green energy stocks in 2018...

China Is a Solar Energy Powerhouse

China already leads the world in solar energy production, but its growth potential is still staggering.

Back in 2016, China set ambitious goals for solar energy production for its five-year plan.

China's five-year plan vowed to produce 105 gigawatts of solar power by 2020. At the time, that was committing to very large goals: tripling the production of solar power in China every single year for five years straight.

The World's First "Universal Fuel": Physicists have known about an unlimited source of free fuel for over 100 years. See where the big money is headed right here...

And China's incredible growth didn't happen by accident. The government has made a serious push to move the country toward renewable energy sources.

Plus, China has vowed to put an additional $360 billion toward energy from renewable sources by 2020.

But its future growth is what creates such a once-in-a-lifetime profit opportunity...

The global solar industry is poised to explode in growth.

IRENA forecasts that global renewable energy production will double by 2030.

That isn't an accident. As the costs of solar energy drop below the costs for traditional energy sources, countries across the world will readily switch to the cheaper, more efficient energy.

You see, solar energy is "free"; there's no costly extraction process or need to transport it across the world. It's only a matter of developing the technology to harness the power of the sun.

And the cost of that technology is drastically dropping.

Money Morning Global Energy Strategist Dr. Kent Moors points out that solar energy has at last hit grid parity in most of the world.

Even in the United States, at least 29 states have seen solar power achieve grid parity with traditional energy sources like natural gas and coal.

But solar energy makes up only 5% of China's energy output, compared to coal's 59%.

Imagine what will happen when solar power earns a larger market share.

If solar power - which China is aggressively pushing as a replacement for coal - takes just 50% of coal's share the growth potential is unbelievable.

Wood Mackenzie projects that generation of solar power in China will soar by more than 700% by the time 2035 rolls around.

That means investors looking for the best green energy stocks are still early to the party if they act right now.

And to help make it easy, we've uncovered the top green energy stock to own in 2018, one that capitalizes on China's incredible solar growth potential...

The Best Green Energy Stock to Buy in 2018