Bitcoin prices are now down 24% in a week as traders continue to fret about ongoing regulatory efforts around the globe.

On March 7, the U.S. Securities and Exchange Commission (SEC) announced that cryptocurrency exchanges that trade securities must register with the federal agency. 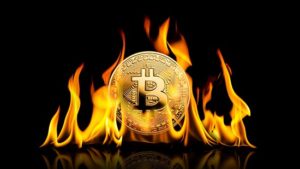 CNBC reported that the SEC may be setting up for another crackdown on cryptocurrencies. "They have previously said initial coin offerings (ICOs) are securities and that anyone selling ICOs to the general public should register with the SEC. But this goes further, the SEC thinks even the exchanges listing ICOs should themselves register. It's another move toward further regulation."

Regulations and potential regulations help spread fear, uncertainty, and doubt throughout the cryptocurrency community, which causes some coin holders to panic and sell.

Here is a recap of the top cryptocurrency prices at 12:30 p.m. EST.

On Friday, the market capitalization of the global cryptocurrency sector fell to $394.52 billion.

Bitcoin comprised 37.9% of the total cryptocurrency market, with a market cap of $149.56 billion. Markets are also reacting negatively to news around cryptocurrency exchange Binance. The head of the Hong Kong-based exchange admitted that trading issues affected some accounts due to phishing.

On top of all that, Japan's Financial Services Agency suspended the operations of two exchanges.

The top performer of the day was Bitcore, which gained more than 11%.

On Friday, the People's Bank of China Governor Zhou Xiaochuan took aim at cryptocurrency platforms that have changed their goals to promote market speculation on coins and tokens.

"Lots of cryptocurrencies have seen explosive growth which can bring significant negative impact on consumers and retail investors," Zhou said.

"We don't like (cryptocurrency) products that make huge opportunity for speculation that gives people the illusion of getting rich overnight."

Some traders took this statement as a sign of another coming crackdown on cryptocurrencies by the nation's central bank.

China has already shut down social media accounts of local cryptocurrency exchanges, banned ICOs, and pushed local exchanges out of the country.

The managing director of Ripple unveiled his company's plan to disrupt cross-border payments around the globe.

Must Read: Ripple Prices Could Climb to $16

"I think a lot of what you see in the cryptocurrency space and in the blockchain space is really focused on experiments or small proof of concepts," he told the newspaper.

"But Ripple is really determined to make sure that we are focused on serving real customers."

Crypto Worries Out of Egypt

Finally, a disturbing report from a research team at the University of Toronto surmises that the Egyptian government has hijacked the Internet connections of users to secretly mine different digital currencies.

The study found that 95% of devices studied in their research had been affected by cryptocurrency mining malware.