The CEO of Ripple, Brad Garlinghouse, says that Bitcoin could be the "Napster" of cryptocurrencies.

"Some may look back at Bitcoin and say that it is the Napster of digital assets," Garlinghouse told Bloomberg Asia. 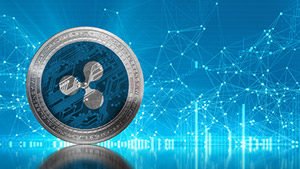 Meanwhile, crypto investors are reacting to news out of Europe.

In a blog post on the IMF website, Largarde said that blockchain can be an integral part of ensuring greater oversight and tracking of cryptocurrencies in order to eliminate illegal activity.

"We can harness the potential of crypto assets while ensuring that they never become a haven for illegal activity or a source of financial vulnerability," she said.

On Tuesday, the market capitalization of the global cryptocurrency sector hit $374.25 billion. Today's top performer out of the top 100 cryptocurrencies was Populuous, which gained 25.62%.

The price of Bitcoin fell below $9,000 at one point in the last 24 hours before slightly rallying. Traders are blaming a so-called "Tokyo Whale" - a Japanese Bitcoin holder who sold a huge position - for the downturn in the price of the cryptocurrency.

The trader is a former trustee of the defunct Bitcoin exchange Mt. Gox, which collapsed in 2014 during a high-profile hacking event. The trustee sold off about $400 million in cryptocurrency, according to a filing from last week.

The sell-off comes just days after the U.S. Securities and Exchange Commission announced that cryptocurrency exchanges must register with the federal agency.

It's been a difficult time for bullish Bitcoin holders. According to the "Bitcoin Misery Index" (BMI), positive sentiment for Bitcoin is at its lowest level since August 2011.

The BMI is a measurement of how happy or sad Bitcoin investors are by measuring the cryptocurrency's price consistency over a three-month period.

A major problem in Russia has been a surge of fires that have hit apartment buildings and other facilities where individuals have been mining cryptocurrencies.

Today, the Russian government shut down an abandoned factory where people were farming Bitcoin and tapped into the electricity grid.

The government described the Bitcoin farm as something similar to a "scene from the Matrix." The thieves allegedly stole about 60 million rubles ($1.05 million) of electricity for their illegal operations.

Looking for your report