For both silver bulls and bears, the performance of the price of silver over the last year has been frustrating.

Over the last 12 months, silver has consistently moved between $15.50 and $18 - a 16% range that has offered little in the way of significant profit potential.

However, the days of low returns from the precious metal may soon be behind us.

You see, silver is becoming an increasingly important commodity in the industrial production of some of our most in-demand modern-day goods. Everything from iPhones to electric cars require silver as an essential component. 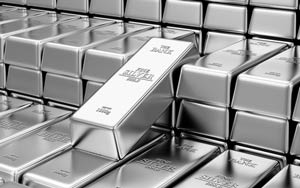 With demand growing, I believe silver prices are preparing to break out of their narrow price range and enter a boom phase of epic proportions.

Silver's imminent price move will set long-term silver investors up for immense profit. With silver trading for so little, now is the perfect time to establish a position in the precious metal and prepare for dramatic gains.

How dramatic? Let's take a look at the price of silver's performance over the last week and my estimates for how high it's heading next...

The Price of Silver Is Rising on an Increasingly Restrained Dollar

Silver gained on Tuesday (March 6), as the U.S. Dollar Index (DXY) fell significantly. The dollar's weakness came on the heels of the U.S. steel and aluminum import duties imposed by the Trump administration.

You can see the dollar's rally in the DXY chart below. 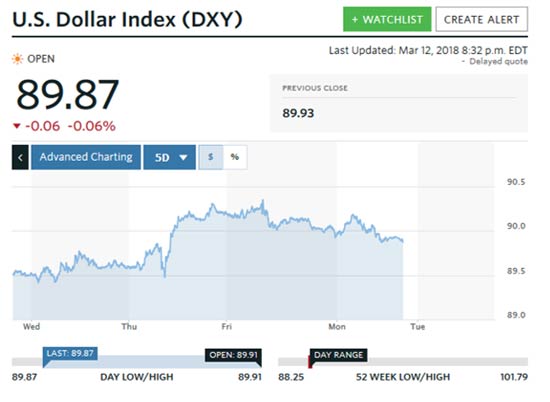 On Friday (March 9), the dollar paired its gains as stocks jumped on news that U.S. President Donald Trump would allow some countries to be exempt from the new steel and aluminum tariffs. The DXY retreated just above 90, while silver, which opened at $16.42, jumped to a midday peak at $16.63, then sold off slightly to close at $16.57.

Looking at last week's performance, it's apparent that silver's daily price movement is trading in a very tight range.

In fact, technical indicators suggest the precious metal is poised for a significant breakout.

Let's take a closer look at this indicator - and my profit target for the price of silver...