Trying to time the rocky crypto markets right now is the fastest way to financial ruin.

That's according to cybersecurity savant and crypto guru John McAfee, who didn't mince his words Wednesday about the benefits of long-term crypto investing versus short term.

In response to a panicked Twitter follower's plea for insight – one fraught with dismay over cryptocurrencies' broad negative price numbers of late, McAfee tweeted:

"If you are a long term investor you will have no concerns. If you are short term, I can give you no advice, other than short term investers [sic] can hope for mediocrity at best, and oblivion at worst." 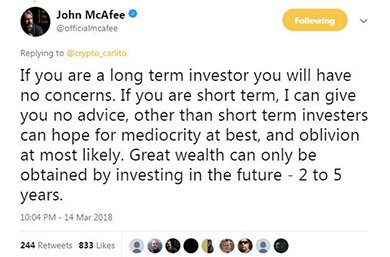 Now, it's no surprise that a crypto investor – especially an amateur – would turn to McAfee for advice. The anti-virus software pioneer has been doling out predictions, warnings, and suggestions to his 803,000 followers for years. 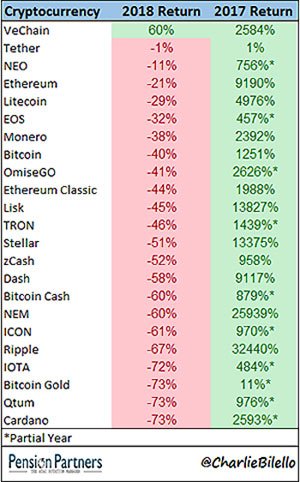 The panicked investor who reached out to McAfee has reason for concern, of course. After all, of the 28 most popular digital coins on the market today, 27 have been and still are "in the red" so far this year, reported StockTwits this morning.

It's precisely this type of negative data that validates McAfee's advice – including the poignant prediction embedded in it – that short-term Bitcoin investors "can hope for mediocrity at best, oblivion at most" if they panic-sell their digital assets at this juncture.

McAfee's implicit message here is that long-term crypto investors – those who've been in the game for several years – have seen this kind of volatility plenty of times before. And to them, these price drops mean one thing: price surges later on.

So they "HODL" like their lives depend on it.

Money Morning's in-house crypto expert David G. Zeiler, who started mining Bitcoin in 2011 – way before the digital coin was considered inherently valuable by major hedge funds like it is today – has written extensively over the years about the benefits of long-term crypto investing.

Here's a look at David's prescient coverage of BTC's history of herky-jerky movements, plus how to handle them…

John McAfee Isn't Rattled By Wild Crypto Rides; You Shouldn't Be, Either

"Essentially, what McAfee was saying," David explained today, "is that those who've owned Bitcoin for more than a year have learned to shrug off the big drops."

To this point, David wrote last June about BTC's price movements over the prior three years – particularly on its tendency to plummet downward before surging even higher again. 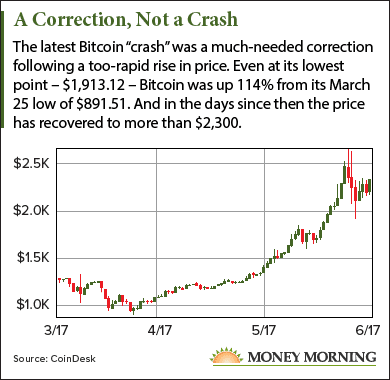 But as far as David was concerned last June, that correction was much needed; Bitcoin's price had increased too rapidly beforehand. Such unimpeded acceleration often foreshadows a price drop sooner rather than later.

So, the fact that today (March 15) Bitcoin sits at $8,057 doesn't worry long-term investors like David or John McAfee. "They realize that over time the Bitcoin price will not only go back up, but will go much higher than before," David said.

But the surest way to lose out is to sell when the going gets tough.

If You're Looking to End 2018 with $1 Million in Your Account, Start Right Here… Because it only takes 10 minutes to set yourself up to make more money from the markets than you've ever seen in your life. I've never seen a simpler method for scoring fast, consistent money-doubling opportunities. A year from now, you could be looking back at this moment as the defining event of your financial future. The first step on your road to millions starts right here.