Dramatic cryptocurrency price increases over the past couple of years show just how much the new technology is growing in power and influence.

And that has the Big Banks worried.

Last year the amount of capital invested in cryptocurrencies grew large enough to start making Wall Street nervous. When cryptocurrency prices were soaring in early January, their total value - sometimes referred to as "market cap" - shot up to $830 billion.

On one hand, Wall Street giants like Goldman Sachs Group Inc. (NYSE: GS) and JPMorgan Chase & Co. (NYSE: JPM) recognize the potential of blockchain technology - the distributed digital ledger that most cryptocurrencies are built on - to streamline their own operations.

But while Wall Street wants to harness the blockchain for its own purposes, cryptocurrencies like Bitcoin - which function outside of the control of any government or central bank - represent a threat.

That, combined with the large capital flows into cryptocurrencies, has put Wall Street on notice...

This year most of the Big Banks - as well as several regional banks - added cryptocurrencies as one of the risks to their business in filings with the Securities and Exchange Commission.

"Both financial institutions and their non-banking competitors face the risk that payment processing and other services could be disrupted by technologies, such as cryptocurrencies, that require no intermediation," JPMorgan wrote in its annual report.

"The widespread adoption of new technologies, including internet services, cryptocurrencies and payment systems, could require substantial expenditures to modify or adapt our existing products and services," the Bank of America report said.

While cryptocurrency prices have pulled back this year, they still rival the valuations of the Big Banks. And the banks know at some point money will start pouring into the crypto space again, supplying more "ammo" for challenging Wall Street's dominance of the financial world.

This chart from mid-February compares the size of cryptocurrencies to the market caps of several Big Banks.

It shows why cryptocurrencies have landed on the list of things Wall Street is worried about... 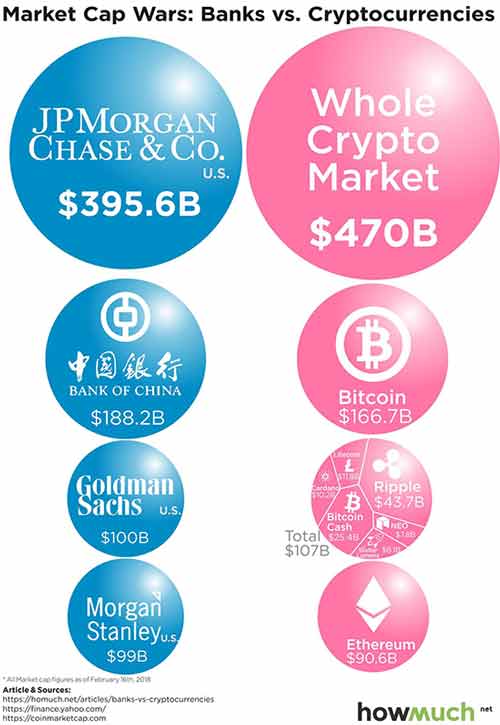 Click to Enlarge
And while the rise of cryptocurrencies threatens Wall Street banks, it could be your next profit opportunity...

There's an incredibly lucrative series of events set to occur that could send crypto prices soaring... and if you've been standing idly by while the crypto market takes off, you owe it to yourself to see how to take advantage right away.

Cryptocurrencies are turning the entire investing world upside down - and if you're not prepared for potential profits right now, you might as well start preparing to kick yourself instead.

To see how you could make a fortune from the "Big Three" cryptocurrency events, go here.

IT truly would break my heart to see the big banks completely have to restructure their size and get back to what they were designed for instead of building mega corporations to control the world debt. These industries are not only outdated and not needed but are so corrupt as to be more criminal than useful. They do whatever they can (legal or not) to get profits. As an industry that has no credibility left as a result of their own actions, it couldn't happen to soon for me.