Members of the Federal Reserve's Open Market Committee will meet Wednesday (March 21), which will help boost gold prices in 2018...

Gold prices have been stuck in a tight range between $1,310 and $1,325 over the last week, but the Fed meeting this week could propel them higher.

Before the last several Fed rate hikes, gold corrected modestly in the weeks before, then jumped higher once traders and investors felt more comfortable "buying the news." 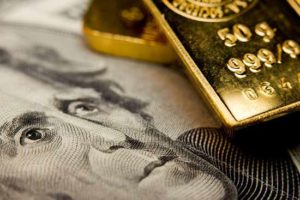 In late February, newly installed Fed Chair Jerome Powell laid the groundwork for hiking rates up to four times this year, up from earlier estimates of three rate hikes. It's no surprise, then, that the CME FedWatch Tool shows a 91.6% probability of a rate hike Wednesday.

And if the price of gold responds to the rate hike like it has in the past, we could see the precious metal to rally and break above its resistance level near $1,370.

Plus, gold prices have been showing a consistently bullish pattern over the last year, which means a new catalyst could trigger even higher gold prices.

I'll show you my gold price target and the bullish pattern I'm following in just a bit, but let's take a look at what moved gold prices last week first...

Gold Prices Traded in a Narrow Range Thanks to the Dollar

Gold opened the week on Monday (March 12) at $1,315. The lower-than-expected price was clearly in response to the rallying U.S. dollar, whose index had seen an earlier rally that took it from 90 to 90.18.

But that quickly reversed, as headlines reported a record U.S. budget deficit in February of $215 billion, the largest in six years. As the dollar pulled back - the U.S. Dollar Index (DXY) fell to 89.9 by the afternoon - gold rose to $1,323 by the close.

On Thursday (March 15), traders began looking forward to next week's Fed meeting and pricing in the likely rate hike. That helped the DXY run up from 89.65 to 90.10 by late afternoon.

Check out the dramatic jump in the DXY on Thursday... 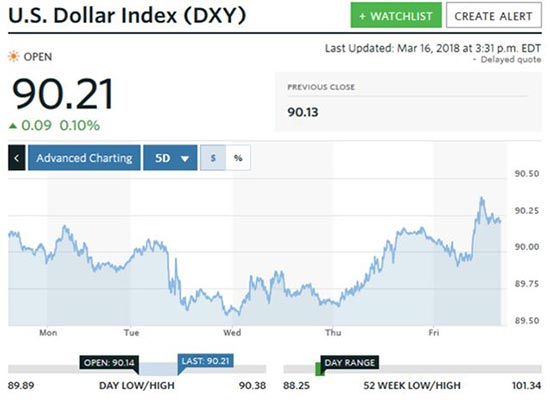 Gold typically sells off slightly ahead of a Fed rate hike, but the sell-off ends soon after, sending gold prices even higher.

Here's my gold price prediction after the March rate hike, including the bullish pattern I'm seeing...

How High Gold Prices in 2018 Can Rise

Sorry Mr. Krauth, the charts and statistics are not important now (during the good old days yes) anymore but only the criminal manipulators on Wall Street and even Jupiter(Florida)