Water is one of life's necessities, making it an ever-growing investment opportunity. And today, we're giving you the best water stock to buy in 2018.

Money Morning Executive Editor Bill Patalon first alerted readers about this water stock in 2013, when it was trading for $34.53 per share. 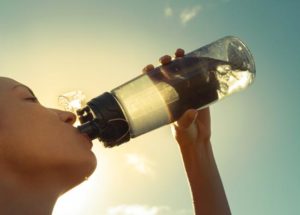 Now, you may think that the best this company has to offer is in the past, but that is far from the truth. Even if you didn't believe that this was among the top water stocks to watch in 2013, there are still profits ahead for shareholders.

In fact, one firm believes it could climb another 14.92% over the next 12 months.

Remember, that's just the next 12 months. This is a stock you're going to want to keep for the long haul. After all, water will never go out of demand.

But the demand is even more urgent than you might think. We are on the brink of a full-fledged water crisis, and the company we are about to show you will be essential to solving it...

While this planet is covered with water, just 2.5% of the earth's water is freshwater, which is what we need to drink, bathe, cook, and grow food.

And just 1% of that freshwater is easily accessible.

The conditions have been caused by several years of low rainfall levels, where the period from 2015 to 2017 was the driest since 1933.

The city has established water-saving measures, but they aren't enough to save it from what is now being called "Day Zero." This is the time when the area's dam levels reach 13.5% of capacity, meaning the taps will have to be turned off.

As it stands today, Day Zero is expected to arrive on July 15, although some are predicting the day could happen as early as April.

The population of Cape Town has been forced to live on just 50 liters of water each day. This means that no baths are allowed, showers must be limited to 10 liters, and a home's toilet can be flushed just once daily.

When Day Zero does arrive, residents of Cape Town will be in an even more dire situation, as they will have to queue up for their daily water allotment.

Unfortunately, South Africa isn't the only place with water issues...

Even in the United States, major parts of the country's water infrastructure need significant improvements.

The National Resource Defense Council rates drinking water resources in major cities such as San Francisco and Atlanta as "fair to substandard."

Back in 2011, the U.S. Environmental Protection Agency (EPA) released a report on the nation's drinking water resources and concluded that it would take an investment of $384 billion over two decades to upgrade and modernize the U.S. wastewater and water systems.

The American Water Works Association (AWWA) also studied that issue, and its analysis found that it's going to take closer to $1 trillion over 25 years just to restore deteriorating underground pipes.

Fortunately, some companies are working to solve these substantial problems.

Our top pick in this sector is positioned to not only solve many of these issues, but it will handsomely reward shareholders at the same time...

Energe is one of the oldest invisible audience on planet earth before time began. Ps It come s from wisdom ( PURE THOUGHT.) It travels at the speed of thought. Ps Light travel is to show. I have the Aunty dougt to this answer and the you no. Ps I'm a peacemaker" and I would love to here from you on this topick my friend.