Losses were bad across the board. Tech, industrials, healthcare, and energy fell at least 1%, while financials were down 1.6%.

Leading companies like Boeing Co. (NYSE: BA) and Facebook Inc. (Nasdaq: FB) dipped more than 3% on the day, too. 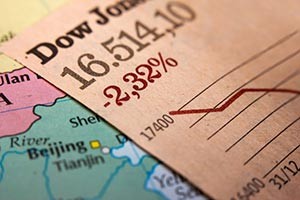 While the drop was unpredictable, we've rounded up the three major reasons for today's Wall Street sell-off so you know what's going on.

Here's why stocks are down today, and we'll even show you a strategy to protect yourself if things get worse...

On Thursday (March 15) afternoon, the Trump administration announced $50 billion worth of tariffs on Chinese exports. This is in addition to the steel and aluminum tariffs U.S. President Donald Trump imposed two weeks ago, which take effect tomorrow (March 23).

These latest tariffs are the first specifically targeting Chinese goods - a challenge that has markets roiling over fears of economic retaliation from the world's largest manufacturer.

Early indicators suggest that China is likely to introduce strong countermeasures to push back against the United States' protectionist policies.

According to a statement from the Chinese government, China is prepared to take "all necessary measures" to defend its economic stability and called the new tariffs "detrimental to both sides."

Manufactures heavily reliant on the raw resources provided by China were hit the heaviest in Thursday's trading - Caterpillar Inc. (NYSE: CAT), Boeing Co. (NYSE: BA), and Deere & Co. (NYSE: DE) were all down over 2%.

And just as the tariffs are sinking in, investors' pessimism is rising as a key figure leaves the Trump team...

A New Wrinkle in the Russia Investigation Raises Pessimism

Dow Jones stocks are also reacting to developments in the Trump White House.

Dowd, who acted as President Trump's chief representative to special investigator Robert Mueller, III, since last summer, reportedly left after President Trump repeatedly rejected his advice on how to handle the special counsel.

For investors, Dowd's departure suggests that the president will take a more aggressive approach to rebutting Mr. Mueller's investigation - a move that's likely to foster uncertainty in Washington and increase volatility in the markets.

The Fed Is Growing Hawkish

Powell announced that the Fed would remain on "high alert" for rising inflation and noted that many securities may be overvalued "relative to their historic norms."

In addition, Powell announced that the Fed would raise interest rates by a quarter of a percentage point. This is the sixth time that the Fed has raised interest rates since December 2015, after slashing rates to historic lows after the 2008 financial crisis.

While a single-day decline in the Dow is not a reason to panic, today's troubling events show just how quickly stocks can fall, and why investors always need to be prepared.

And while stocks have been turbulent lately, it's nothing compared to what a real crash could do to your money...

Don't wait - You can see all the details right here.