With nine states legalizing recreational marijuana in the last eight years, many investors are asking "which states will legalize marijuana next?"

You see, a larger market for marijuana doesn't just mean profits for those only directly involved in growing weed. It means immense profit opportunities for any industry even slightly involved in the growth and production of recreational marijuana. 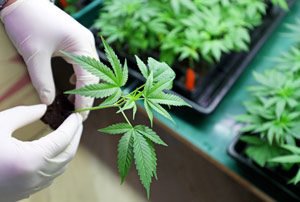 Strong demand is sure to line the pockets of any company involved in the goods required for the production of marijuana - companies developing specialty lighting, indoor growing systems, and real estate for marijuana cultivation all stand to benefit.

And that doesn't even begin to get into the profits from distribution, financing, and protection of recreational marijuana.

With such immense profits in the making, Money Morning has used its contacts in the cannabis industry to determine which states will legalize recreational marijuana next. By doing so, we're getting our readers in on the ground floor of one of the greatest profit opportunities in ages.

Here are the next three states to legalize marijuana according to our analysis...

Ralston believes that Arizona is a strong candidate for legalization because the state's last attempt to legalize recreational use only narrowly failed.

It's highly likely that Arizona follows through with legalization the next time the state heads to the ballot box.

However, out next experts have an even bolder prediction...

Jack Rein serves as director of national services for Acology Inc. (OTCMKTS: ACOL), a worldwide design, manufacturing, branding, and sales firm. It created the Medtainer, a container in which patients can grind, store, and pour a wide variety of medications.

Rein predicts that, of all the states facing legalization, Delaware is likely to be the next one to vote yes.

While Rein and Ralston have different opinions about which state will legalize recreational marijuana next, we spoke to two experts who agreed that legalization could be imminent in this next state...