With the U.S. Federal Reserve's rate hike now behind us, the price of silver could well be embarking on a fresh rally.

In fact, the precious metal is starting to act well in the face of both market weakness and market strength.

The U.S. dollar has tried multiple times since mid-February to push higher, but each attempt was fruitless. 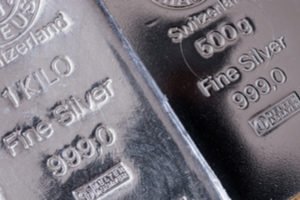 Plus, silver stocks are also starting to look like they may be outpacing the gains in silver itself, further suggesting a new run higher for the precious metal.

There are three technical indicators I'm watching right now that suggest higher silver may not be far off. Before we get to the indicators, here's how the price of silver is trending now...

On Wednesday, silver opened up over the previous close, at $16.21. And as if in anticipation of the rate hike confirmation, the grey metal quickly jumped to $16.45 by noon, then jumped further in the wake of Powell's post-hike remarks. That took the DXY back down to 89.65, helping silver to climb further to a 4:00 p.m. peak at $16.59 before settling back to $16.55 at the close. Meanwhile, the Global X Silver Miners ETF (NYSE: SIL) had jumped an impressive 3.64% on the day.

But Thursday was rough on stocks, as U.S. President Donald Trump threatened to slap $50 billion in tariffs on Chinese imports over its unfair trade practices involving intellectual property with American companies. The S&P 500 fell 2.5%, and the Dow lost 724 points, or 2.93% on strong selling action. For its part, silver gave back only 1.2%, ending at $16.34, as the DXY gained slightly.

Here are the DXY and Dow over the last five days, for perspective. 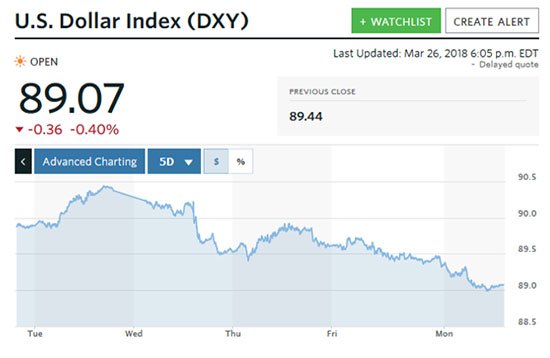 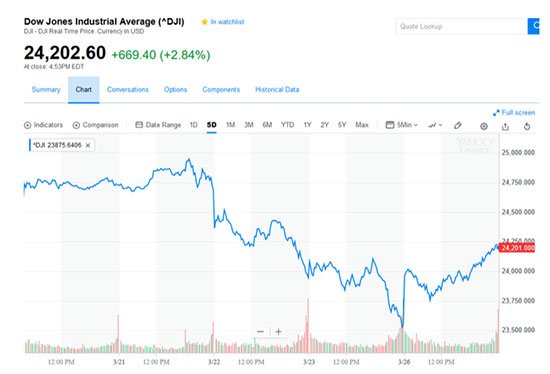 Then, on Friday, as the Dow took another shot to the gut, silver popped. In fact, silver started higher late Thursday as the dollar faced renewed selling. By Friday's open, silver reached $16.49 and climbed slightly from there, as the DXY weakened gradually. At 5:00 p.m. silver was slightly higher, at $16.53, while the Dow had lost another 1.8%.

But on Monday, March 26, stocks turned higher again on reports that the United States and China were open to renegotiating tariffs and imbalances in trade. Still, the DXY weakened from 89.50 down to 89 before a slight recovery. And silver headed up once again, opening at $16.57, then peaking at $16.75, before settling back to a strong finish at $16.58.

And that was just the start for silver's momentum as I see it. In fact, I've found three separate technical indicators that all indicate the price of silver is poised to continue rallying from here...

3 Reasons I'm Bullish on the Price of Silver Now

Dear Mr. Krauth,
When you tell us that the prices of gold and silver will go higher, in fact
prices go lower. Silver from 16.55 down to 16.44 today.