Volatility reared its ugly head again last week. The S&P 500 dropped 6% over the course of the week. The Dow fared even worse, with a 9% plunge.

The market jitters came at a particularly bad time for a stock we like, pharmaceutical giant AbbVie Inc. (NYSE: ABBV). On Thursday, the company released disappointing news regarding phase 2 trials for one of its leading drug candidates. 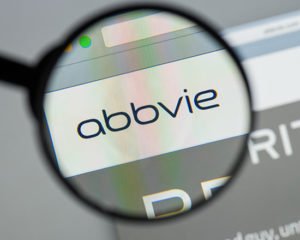 Based on its trial results, as well as conversations with the Food and Drug Administration, AbbVie said it will not seek fast-track approval for Rova-T. The drug is intended to treat a category of small-cell lung cancer that currently has few existing treatment options.

AbbVie added Rova-T to its pipeline in 2016, when it acquired biotech startup Stemcentrx for $5.8 billion.

The size of the deal turned a lot of heads at the time. Those who criticized it are likely feeling vindication, as shares of AbbVie plunged nearly 14% in two days.

Media outlets have been quick to point out that this is the biggest decline in ABBV shares since October 2015. That's when the stock dropped 14% immediately after the FDA issued warnings that two of the company's hepatitis C drugs could cause liver damage.

That was a serious setback. It required new labeling and tempered expectations about how widely those drugs would be used.

But what most outlets won't tell you is how quickly ABBV rebounded from that 2015 drop, or that the stock is up 96% since then. 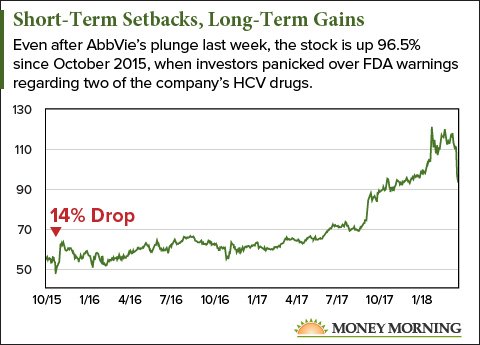 Anyone who rushed for the exits over that panic is regretting it now. And while we're not going to pretend that the news about Rova-T isn't disappointing, we think the market is once again overreacting and will regret it down the road.

Put simply, AbbVie is still a great stock to own.

AbbVie Is Built to Weather Volatility

When Money Morning Director of Technology & Venture Capital Research Michael Robinson recommended AbbVie in February, he had volatility in mind.

"When volatility hits," he wrote, "one smart move you can make is to start buying companies that richly reward their investors through dividends and stock buybacks. These are companies that are going to pay off no matter the noise in the markets."

Likewise, when we named ABBV one of our best stocks to buy, we said it was a good pick to ease the pain of "the occasional 5% and 10% dips in market value" that would inevitably come.

AbbVie's market cap is around $150 billion, and the company has over 50 drugs in its pipeline. The idea that disappointing results for one drug - itself only one part of a $5 billion acquisition - is going to seriously hinder AbbVie's long-term growth potential is a little tough to swallow (pardon the pun).

Nor does this mean Rova-T won't ultimately get FDA approval. The company is simply pursuing a slower course based on current data.

But there's a reason we didn't mention Rova-T in our earlier assessments. We wouldn't recommend a pharmaceutical company based on one drug in mid-stage trials.

We would recommend one if it showed multiple healthy growth factors, like these...

Why AbbVie Is Still a Buy