China warns the United States that it's about to open "Pandora's Box."

The warning comes in response to the trade tariffs U.S. President Donald Trump issued on March 22, which slap China with $60 billion worth of taxes on steel and aluminum imports to the United States.

Should Uncle Sam continue testing the hinges of this proverbial "Pandora's Box," China claims the consequences will surely hit American consumers the hardest.

And in this case, the Red Dragon is right.

Here's how the brewing trade war will affect your wallet...

China Warns It Will Target These U.S. Goods

Just six days ago, on March 23, China's Ministry of Commerce made its first retaliatory threat against Trump's tariffs, saying it had compiled a list of 120 products worth nearly $1 billion, including fresh fruit and wine, upon which it would impose a 15% tariff if the two countries fail to resolve their trade differences "within a stipulated time," The Washington Post reported.

Fresh fruit and wine are just two of the 11,741 products imported from the Red Dragon to the states each year, which, in 2017, amounted to some $506 billion worth of goods total.

Then, today, Beijing pressed on with its threatening ways....

"Washington will face the consequences," spokesman for the Chinese Commerce Ministry Gao Feng said this morning, according to the country's state-run media outlet, China Daily. 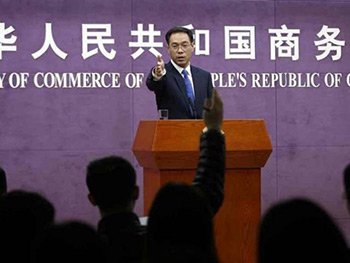 "The malicious practices of the U.S. are like opening Pandora's Box, and there is a danger of triggering a chain reaction that will spread the virus of trade protectionism across the globe," Gao added.

Gao followed up with a "recommendation" that sounded much more like a thinly veiled threat.

"We would like to recommend the United States to refrain from any actions which could harm the trade and economic relations between the two countries, otherwise the United States will fall into the pit it is digging for others," Gao said.

The Chinese spokesman's "friendly" advice implies that Trump's tariffs are to blame for any potential fallout in trade, though he couldn't help dropping another hint that the Red Dragon will retaliate...

"While China hopes the U.S. will resolve trade conflicts with Beijing through dialogue, it will take all possible steps to protect its interests," Gao added. "Negotiations must be equal, and China will not accept any consultation under unilateral coercion."

Indeed, there are still negotiations to be had before the trade tariffs and China's retaliatory measures are enacted.

Per its own stipulations, China has until Saturday, March 30, to add suggestions and opinions on the issue, after which Beijing's government will begin consultations on specific "additional countermeasures" on Trump's trade tariffs.

Once those countermeasures are imposed, American consumers will really feel the pressure on their wallets.

And that's just the tip of the iceberg when it comes to threats to America's economy.

Investors, it's time to prepare for what could be a formidable stock market reckoning the likes of which we've never seen...

What he didn't say is that those rate hikes could send the U.S. economy into a tailspin... and very well might lead to the greatest economic collapse since the Great Depression.

Chinese 'tariffs' and other restrictions and required transfer of patents and intellectual property for imports of US goods should be widely specified and made known. Same with the EU. Trump's 'tariffs' will then appear fair and hardly punitive. US trade into China and EU is restricted by protectionist policies and penalized, their trade into the US is largely without restraints. Ignore Chinese 'threats'. They will negociate rather than reprise.

as long as there is such a disparity between US and Chinese labor costs, the Chinese will always hold an advantage