The Dow Jones Industrial Average today is down more than 600 points (-1.76%), ending a volatile week of price swings.

The drop was once again unpredictable, but we've rounded up the two biggest reasons for today's sell-off on Wall Street to keep you in the loop. 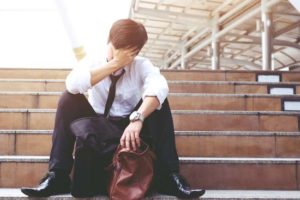 The first reason the stock market is down today is because of the March 2018 jobs report.

Unemployment remains steady, and the rate stayed at 4.1%. It's been the same for six straight months.

That was well below analysts' expectations of 185,000 new jobs.

That has investors worried, because the U.S. Federal Reserve continues to hike interest rates. Fed Chair Jerome Powell is consistently optimistic about the economy's strength and its ability to handle higher interest rates.

"The labor market remains strong, and my colleagues and I on the Federal Open Market Committee expect it to remain strong," Powell told the Economic Club of Chicago today.

Higher interest rates coupled with a weaker-than-expected economy could put downward pressure on the stock market.

Mr. Trump says we just have to live through it, concerning any market decline from his Trade War. Sounds like the left wing "do-gooders" he rails against. It's all for our ultimate good, he'd have us believe.
Chuck Burton

It seems clear that Trump's modus operandi with virtually everything he does and decisions he make are akin to mirror images of the strategies and procedural, operational steps that he and others with a real estate background practice. We should not be surprised. Hopefully, the Chinese (and others) recognize those traits and join in "the ritualistic dance" that is just an integral part of arriving at the finish line.

The greed is showing people making money don't care about America. The market is up thousands and tripled since 2008 . God forbid the market goes down for a couple of days. Trump is talking about long term gains before we all have to learn CHINESE