His $26 billion family office is planning to trade digital assets, according to Bloomberg. 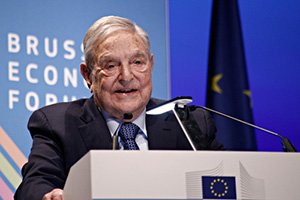 Soros has indirectly bet on the cryptocurrency market, investing in Overstock.com Inc. (Nasdaq: OSTK) in Q4 2017 and becoming its third-largest shareholder. Overstock accepts cryptocurrencies for its products.

In other news, the price of Bitcoin fell another 3.3% after one of the cryptocurrency market's most infamous former executives issued a bearish sentiment on the coin.

Mark Karpeles, the former CEO of the exchange Mt. Gox, said on Reddit that he doesn't believe in Bitcoin's long-term viability.

"The technology is definitely here to stay, but Bitcoin may have trouble evolving and keeping up," he said.

Karpeles also pinged Ethereum with a negative review. He said that Ethereum is "too untested" to have any widespread use in the future.

Meanwhile, markets were keeping a close eye on developments out of India.

The Economic Times openly questioned the motivations of the nation's president regarding cryptocurrency and whether India's government is preparing to launch its own token.

This theory has been floated in recent weeks after the nation's central bank banned Bitcoin and created a task force assigned with issuing a report by June on whether to launch a state-backed cryptocurrency.

On Friday, the market capitalization of the global cryptocurrency sector fell to $248.59 billion.

Bitcoin comprised 45% of the total cryptocurrency market, with a market cap of $111.9 billion.

The top performer in the space was DigixDAO, which gained 14.48% over the last 24 hours.

Get Ready for Tax Day

Tom Lee, the founder of Fundstrat Global Advisers, predicted this week that the recent sell-off in cryptocurrencies may generate a capital gain hit of up to $25 billion.

It's possible that many people sell off their coins in the coming week in order to obtain the cash required to fund their cryptocurrency tax bills.

Bitcoin Cash, a spin-off and product of a Bitcoin fork in 2017, is set for its own fork in the future.

According to reports, BTC will fork on May 15.

The fork is designed to permit larger block sizes and a few other key adjustments.

We're on the brink of a global energy overhaul, and one tiny company has the key to it all. If you want to find out how to position yourself for the biggest, most life-changing gains, you better strike now.