Last Thursday (March 29), we showed Money Morning readers how to make a fast profit from the $10 billion marijuana industry through options trading.

And trading options on this "marijuana stock" worked out faster than we ever could have expected...

You can find out all the details about the options trade here, but the company I'm talking about is Microsoft Corp. (Nasdaq: MSFT).

It's a play on the legal weed industry, because cannabis compliance firm, KIND Financial, partnered with MSFT in 2016 to run its software through Microsoft's cloud.

And I uncovered a pattern in the MSFT stock price where it rose before earnings were announced in its past two quarters.

Before Q3 earnings are announced on April 26, I expected lightning to strike a third time...

Now, with stock prices so volatile over this last week because of potential trade wars, a lot of our readers paid different prices to purchase the "May 4 $97.50 Call" I recommended.

Also, because of the Easter weekend, some readers waited until Monday (April 2) to trade.

The gains could be even higher if you got in on a lower price, but for those who bought in when the markets opened on Monday, you most likely paid $0.96 per contract.

Fast Money: Tom Gentile has invented a way you could pocket $1,000, $1,500, even $2,000 in four days or less. And the fast-moving action behind this exciting way to make money starts again Monday at noon. Click here...

If you paid less for the contract originally, you're up even more. 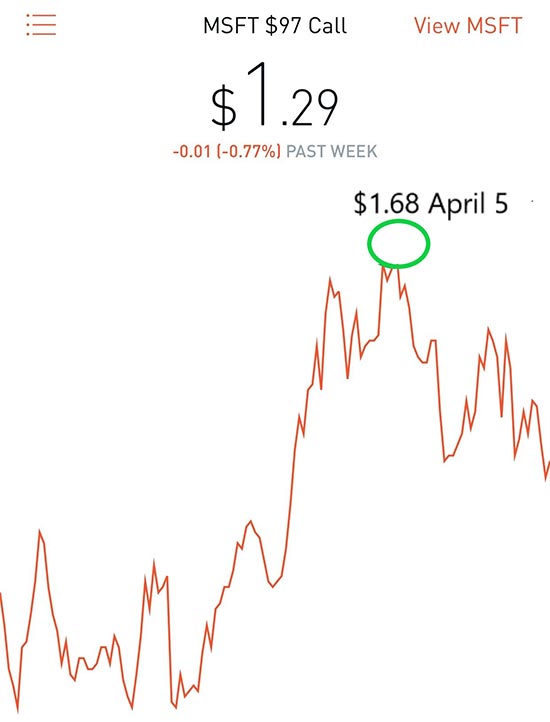 If you cashed out for 75% gains or more, congratulations.

If your position is still open, here is what to do...

Prices have dropped since April 5. The stock market is turbulent, because U.S. President Donald Trump is seeking $100 billion in additional tariffs against Chinese goods.

For risk-averse investors, I would exit the position if it's still up between 30% and 50% on April 9.

Microsoft is one of our favorite investments at Money Morning, but it's still not immune when the entire market falls.

You could be leaving money on the table if the price climbs further, but you're still looking at a 30% to 50% profit in roughly a week.

As we get closer to the May 4 expiration date, I'll keep Money Morning readers updated with a full report sent right to your inbox as soon as it's published through our free Profit Alerts service.

We'll also keep our readers up to date on other profit opportunities through options trading in the cannabis sector as they appear.

It's so easy, you can do it all with a few keystrokes right on your cell phone.

It's so fast, you can pocket any profits in four days or less.

To find out how you can get in position for these weekly windfalls, see exactly what we uncovered right here.

How do I purchase marijuana stock

I am wondering the same thing. All I read about is how I need to get in on the ground level right now to reap the rewards on this. I did get Michael Robinsons Roadmap to Marijuana Millions…..and it is full of great info, but I still have one problem and that is where can I invest in Marijuana Stocks? I am finding how to buy stocks that use a backdoor approach to buying the Marijuana Stocks, but come on…is this the only way? Isn't actual Marijuana stocks being sold on the US stock exchange?

How can I join monday morning call?
Dave