Bitcoin price predictions of $100,000 or more have become increasingly common over the past year.

That may have seemed absurd a year ago, when the price of Bitcoin was just $1,200.

But now, a Bitcoin price of $100,000 is more than just a dream. In fact, an increasing number of experts are convinced it will happen. 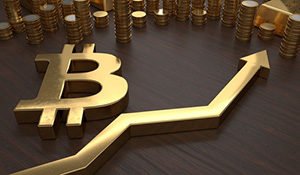 Saxo Bank global macro strategist Kay Van-Petersen thinks it could happen as early as the end of 2018 due to the inflow of institutional money.

"We'll get a cascade of ETFs, mutual funds and other investment vehicles breaking out," he told Bloomberg in December.

Van-Petersen is no stranger to bold Bitcoin predictions. In December 2016, when Bitcoin was trading at $750, he predicted it would rise to $2,000 within a year. The Bitcoin price hit $2,000 less than six months later.

Feldmeier suggested that a large institutional investor like George Soros was responsible for Bitcoin's recent spike from under $7,000 to $8,000.

"I think this incident could become the ignition for the next bull phase," Feldmeier told Express.co.uk. "Over the period of next 2 years I still predict we could see it reach a value of $100,000."

But these Bitcoin forecasts are modest compared to what some other experts are saying...

These Bitcoin Price Predictions See Gains of More than 3,000%

Cameron Winklevoss, who, along with his twin brother Tyler, runs the Gemini cryptocurrency exchange, takes a much longer view - 10 to 20 years - but also has a much higher Bitcoin price forecast.

Speaking to CNBC in February, Winklevoss forecast an increase of 30 to 40 times the $7,500 Bitcoin price at the time. That would put Bitcoin prices as high as $300,000.

He compared Bitcoin to gold, calling the cryptocurrency a "very underappreciated asset" regardless of its volatility.

"Millionaire-Maker": Massive Upgrade Could Send Bitcoin to $100,000 – Click Here to Learn About the Opportunity That Could Deliver a Million-Dollar Payday to Investors Who Act Now!

"Taking Bitcoin in isolation ... we believe Bitcoin disrupts gold. We think it's a better gold if you look at the properties of money. And what makes gold gold? Scarcity. Bitcoin is actually fixed in supply so it's better than scarce ... it's more portable, its fungible, it's more durable. It sort of equals a better gold across the board," Winklevoss explained.

But Bitcoin could get into that price neighborhood even faster if venture capitalist Tim Draper, founder of the VC firm Draper Fisher Jurvetson, is right. Last week, Draper predicted Bitcoin would reach $250,000 by 2022. That's a gain of more than 3,000% in just four years.

Draper famously forecast at the end of 2016 that Bitcoin would hit $10,000 in 2017. BTC went twice as high as that in December before pulling back.

"Believe it. It's going to happen, they're going to think you're crazy. It's gonna be awesome," Draper said of his lofty target.

And it may not be as audacious as it sounds. You see, Bitcoin has numerous catalysts at work...

Why the Bitcoin Price Is Headed for Six Figures

That’s 5 1/2 fold not fortyfold. If you mistake that I think people will be less likely to listen to anything else you have to say in the rest of the article. Maybe think about correcting that and sending out again best wishes to you

Thanks for reading Money Morning. The section of the article you refer to — the fortyfold increase in adoption — is correct. What's confusing is that the percentage of current adoption is not 2.6%, but just over a quarter of one percent — 0.26%. Jumping from that low figure to 10% is technically an increase by a factor of 38.5, but I adjusted a bit for some population increase over the next few years and rounded off. Hope this helps.