The monster Monaco rally happened on news that Bithumb, one of South Korea's largest crypto exchanges, began listing the coin. 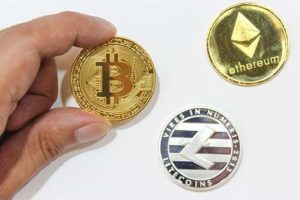 Monaco's platform and the development team behind the MCO tokens are working to promote the mass adoption of crypto debit cards.

Meanwhile, Bitcoin held above $8,200, and cryptocurrency investors are keeping a close eye on G-20 discussions.

Multiple outlets report that members from the world's 20 largest economies are continuing their dialogue on how to create a regulatory framework for the global cryptocurrency markets.

On Thursday, the market capitalization of the global cryptocurrency sector hit $356.30 billion.

Bitcoin comprised 39.4% of the total cryptocurrency market, with a market cap of $140.52 billion.

The top performer in the space was Monaco, which gained nearly 58% on the day.

Saxo Bank noted this week that it has seen a sharp rise in demand from retail and institutional investors.

Some of this sentiment has been fueled by optimism that UK investment bank Barclays Plc. (NYSE: BCS) is looking to open a cryptocurrency trading desk in the months ahead.

This week, we saw the most bullish analysts project that Bitcoin could reach as high as $250,000 per coin in the year ahead.

But today, we also received a stark warning from two economists who said that, by using a theory from 1911, BTC is worth much less than today's price.

The price of Ethereum climbed closer to $600 today, but it's co-founder had a warning for crypto enthusiasts...

Vitalik Buterin warned about potential bubbles in the crypto space while talking with the Financial Times.

He told the financial publication that you know you're in a bubble when a "random project" can raise $8 million and believe it's not enough.

Michael made a prediction about Bitcoin way back in 2013 - and folks who followed his advice stood to become 253 times richer. I'd venture to say not one in 10,000 people is aware of the massive profit potential unfolding right now.