A whopping 1.2 million Americans won't get Social Security benefits - ever - even though they've worked full careers.

These individuals belong to a specific subset of government workers. But they're ubiquitous and absolutely crucial to every American's life.

Indeed, 1.2 million teachers - roughly 40% of public school educators in the United States - have been denied access to the 83-year-old retirement and disability program.

Here's why so many teachers won't be afforded these benefits, and how this huge government shortfall will play into the larger economic reckoning in our immediate future...

For your own financial well-being, read on...

These educators are concentrated in the following 15 states: 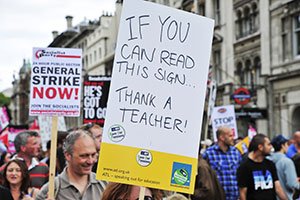 The reason teachers in these states weren't enrolled into Social Security and disability benefits plans dates back to 1935, when the program first started. Fearing constitutional overreach over whether the federal government could tax state and local governments, the Roosevelt administration allowed for individual states to opt out. And those 15 did.

In 1952, an amendment was made to the Social Security Act of 1935 that required opted-out states to provide workers with "generous" pension plans.

But the operative word in the government's revision of the Social Security Act is "generous."

These days, teachers' pension plans are anything but.

That's because the aforementioned 15 states either greatly underfunded these pensions in the 50-plus years since the amendment came to pass, or - arguably worse - they've borrowed against them.

Indeed, states are falling further behind in the money they owe public employee pension funds, leaving taxpayers on the hook to make up the loss, according to an October 2017 analysis from S&P Global Ratings, which tracks state debts.

In other words, last year states funded just $0.68 for every dollar they owe in future pension payments, on average.

And the 15 states that don't offer teachers Social Security and disability benefits in particular have reached a critical tipping point...

"Most [Teachers] Will Never See One Cent of a Retirement Plan"

On March 21, Kentucky's Gov. Matt Bevin warned, "if we don't change anything [about teachers' pension plans], the system will fail, and most of the people now teaching will never see one cent of a retirement plan," reported the Courier-Journal News.

The bill, later signed by Bevin, reversed a policy adopted by lawmakers two years ago to increase funding for the teachers' pension fund by $500 million a year. According to the plan's actuaries, that money was needed to pay off the fund's $14.5 billion debt within 30 years.

Without continued funding at the higher level, actuaries said the plan could run out of money as soon as 2038, the Courier-Journal added.

This conundrum is repeating itself right now in the 15 states where teachers were granted pension fund access in lieu of Social Security or disability benefits; those very pension funds are depleting at breakneck speed due to the local governments' spending and borrowing sprees.

But the "teacher pension" crisis is just one of several catalysts setting America up for a devastating recession.

Hundreds of thousands of teachers retiring penniless will expand the wage disparity between the "common folks" and "the 1%," hastening a concentrated-wage economic collapse - i.e., too much money in the hands of the powerful, too little in the hands of everyone else.

Plus, the economic pundits hired by Uncle Sam are feeding the public lies with their media appearances. There's not been significant progress with the banks and government spending since the financial crisis, as they so often suggest. In fact, the actions soon to be taken by the institutions - swapping and trading risky financial instruments, raising interest rates when the Treausry yield curve is as flat as it was in 2007 - will set us up for an even bigger financial fall.

Which means now is the time for you to prepare and secure your future fiscal well-being.

If so, you could receive money owed to you within the next five days by taking action now.

Oh My; I forgot way back when that I put money into the teahers'
union pension retirement fund. Lucky for me I went into business
for myself and still pay into SS. I've since retired with very good
SS payments, while still working and increasing my SS every year
before I eventually retire next year. Young teacher might not think
about teaching just because of this problem. Oh MY! WHO CAN
AFFORD TO TEACH?

These Teachers have been cheated by there State Goverment and Teachers Union. We pay them to teach our children even though there stupid enough to let there State and Unions due this. I don't think taxpayers owe them anything. They could have paid into Social Security and like a lot of other people ended up the same way.

Hey Curtis! Don't act wise when you are not knowledgeable. Check your spelling too.

Having a dual career, I paid into social security for the time I worked in business and construction. I am screwed because my teacher retirement is deducted from social security benefits which I should have a right to receive. I am 73 and NOT on Medicare or social security. Social security would have paid a whopping $134.10 per monthly after being in the business world for 45 years.