The Bitcoin Misery Index, a buy-sell indicator created by Fundstrat Global Advisors co-founder Tom Lee, has been flashing a "buy" signal for weeks.

The index debuted in early March, when Lee went on CNBC's "Fast Money" program to discuss it. 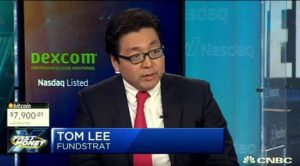 "Think of this index as a way to measure how happy or sad you are owning Bitcoin," Lee said, who maintains a $25,000 Bitcoin price target for the end of 2018.

The Bitcoin Misery Index is a sentiment index that uses a 100-point scale. According to Lee, a score of 67 or higher suggests Bitcoin owners are too "happy" - a sell signal. A score of 27 or lower reflects an excess of negative sentiment ("misery") and is a buy signal.

When Lee introduced the BMI in March, he noted the score of 18.8 was the lowest since September 2011. Definitely a buy signal.

"The last four times this was below 27... there was not a single instance with Bitcoin not up 12 months later," Lee said. 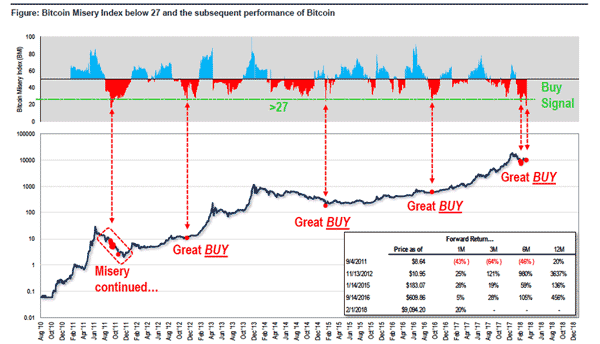 The Bitcoin Misery Index hasn't changed much since, with the price of Bitcoin actually lower now than it was then.

Stunning: New Innovation Will Be Like "Adding Twin Turbos to the Bitcoin Engine" - and Could Send Its Price to $100,000.  Learn more...

So the buy signal continues to flash.

"It's overdue. Bitcoin was incredibly oversold," Lee said. "When you look at metrics like price-to-book, which is 'money cost,' or our Bitcoin Misery Index, it's pretty much what you saw at the end of the 2014 bear market, not the start."

Here's how the BMI works...

Breaking Down the Bitcoin Misery Index

Lee's index is a formula based on the z-score (a measure of how many standard deviations from a mean a data point is) of the ratio winning trades and the z-score of upside/downside volatility.

In terms of more familiar equity indexes, the BMI combines elements of the RSI (Relative Strength Index) and the VIX volatility index.

In practice, the Bitcoin Misery Index functions similarly to the RSI, in that its goal is to identify overbought or oversold conditions.

And it has been mostly accurate. Here's a look at the BMI with some key dates included. 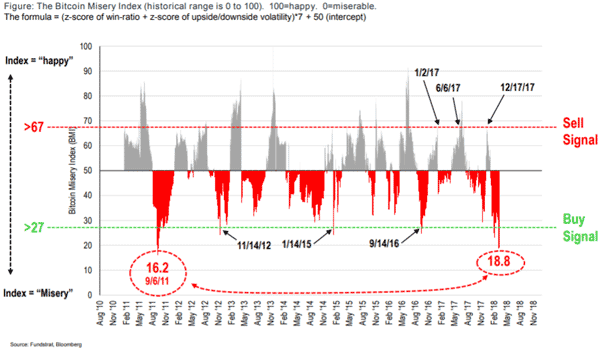 The three BMI lows, when the score dropped below 27, all presaged major Bitcoin rallies. The three BMI highs signaled pullbacks, with the Dec. 17 high coming just before the recent slump.

For traders, the Bitcoin Misery Index is a useful tool that can help identify the best times to buy and the best times to take profits. With an asset as wildly volatile as Bitcoin, such a tool is very handy indeed.

But one key piece of information the BMI can't help with is how high Bitcoin could go from here.

That's okay though, because a lot of top cryptocurrency experts have been making forecasts.