The Dow Jones Industrial Average is almost down a full point in 2018, but David Tice believes things could get a lot worse in the stock market.

That's why we're going to give Money Morning readers all the details on how to form a protection plan in just a bit.

Tice, who is best known for running his Prudent Bear Fund until he sold it in 2008, told CNBC on April 11 that investors should take their money and run. 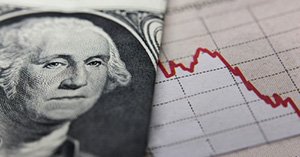 "You guys enjoyed the party. There are a lot of people dancing. But I think that could be pretty dangerous," Tice said on CNBC's "Trading Nation" on April 11.

And according to Tice, there are three reasons why we could be headed toward an economic disaster…

The first threat investors should worry about is a trade war with China.

U.S. President Donald Trump has been posturing with the Red Dragon on tariffs that could cost billions of dollars and have long-term negative consequences for the U.S. economy.

On March 22, President Trump announced plans to place tariffs on $50 billion worth of Chinese imports.

In retaliation, China announced that tariffs on roughly $3 billion worth of U.S. imports would go into effect on April 2.

Without a clear indication whether the United States and China will enter into a full trade war, or its full economic cost, the markets are jumpy.

The second reason that Tice sees potential trouble in the stock market is ongoing fights in Syria.

This was in response to a chemical attack attributed to the Syrian Army that killed 70 people in a town called Douma.

Considering Russia is a major Syrian ally, the conflict has become messy. Russia now says that it is "not ruling out" a U.S.-Russia conflict.

Tice believes that President Trump's rhetoric toward Russia is the third reason why we could be heading toward a stock market crash.

The cost of a war and the strain in international relations it can create always worry the market.

Of course, there's no way of timing a stock market crash.

But it does make sense to be prepared for any possibility.

How to Protect Your Money from a Dow Jones Crash

We're recommending two stocks that have a track record of performing even as the broader market declines. Both of these stocks brought positive returns during the tech crash in 2000, even as the overall markets fell more than 10%.

While there's no guarantee these stocks will be immune to the next correction or pullback, they are some of the best companies in the most in-demand industries.

Money Morning Chief Investment Strategist Keith Fitz-Gerald thinks investors should hold on to stocks in the "Unstoppable Trends." The trick to making huge profits is to find "must-have" companies that fall into these six Unstoppable Trends: medicine, technology, demographics, scarcity and allocation, energy, and war, terrorism, and ugliness (also known as "defense").

The Unstoppable Trends are backed by trillions of dollars that Washington cannot derail, the U.S. Federal Reserve cannot meddle with, and Wall Street cannot hijack.

Raytheon is a leader in the defense industry, with billions in contracts with the U.S. government and other countries across the world. That means if the market falls, Raytheon is going to continue to excel over the long term.

But RTN's real allure as an Unstoppable Trend pick is the fact that war is a reality of the world. For instance, as tensions rise abroad, the United States is more likely to need more weapons and equipment.

When the United States launched a missile strike on a Syrian airbase on April 7, Raytheon's stock jumped more than 2%, since its missiles were used.

BDX is a healthcare company specializing in one-time-use medical products utilized in hospitals and long-term care facilities. That means as populations age, more people will need this type of medical care, and BDX will be in even higher demand.

People will need healthcare whether the market falls or not.

But BDX is also an exceptionally well-managed company.

That means the company's capital management is sustainable and will easily survive a market downturn. And that's good news for its shareholders during a stock market crash.

While these stocks are excellent plays, what we've revealed about the Fed is just the tip of the iceberg…

What he didn't say is that those rate hikes could send the U.S. economy into a tailspin… and very well might lead to the greatest economic collapse since the Great Depression.

Because it's possible to protect yourself from the coming economic disaster – but you have to act now.