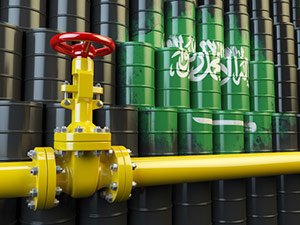 Saudi Aramco has been considering an initial public offering (IPO) since 2015, when Mohammad bin Salman surprised the world by announcing it during an interview.

That has investors eager to get a slice of the world's most profitable oil company and one of the biggest companies on the planet.

And with a potential valuation of $2 trillion, even a 5% stock offering could be enough to shatter records.

Those sorts of numbers mean investors already want to know the price of Aramco stock once it goes public.

We won't know the Aramco stock price until the company is much closer to going public. It's unlikely its underwriters will release a share price estimate until a week before the official IPO, which might not happen until 2019.

Investors don't have to wait around for the IPO to start making money off of Aramco.

How Much Will Aramco Stock Be Worth?

While we won't know the exact Aramco share price until it's ready to IPO, we can deduce some interesting facts about the stock.

Bloomberg uncovered some key information that may help investors understand how much the company is worth.

Bloomberg's Matt Levine extrapolated from Exxon's total income of $19.7 billion for all of 2017 to estimate that Aramco's 2017 income could have come in around $90 billion. He reasons that figure is correct, and as Aramco is valued at $2 trillion, it would place Saudi Aramco's price/earnings (P/E) ratio at around 22.

That's roughly the same P/E ratio as Exxon, which means Aramco's valuation might be accurate.

We simply won't know the Saudi Aramco share price until the company releases the number of shares it's willing to sell and how much it is pricing them for.

How to Profit from the Saudi Aramco IPO