Legal marijuana sales are expected to skyrocket 145%, from $10 billion in 2017 to $24.5 billion in sales, by 2021. That's why we're providing Money Morning readers with the best marijuana stocks to buy ahead of this massive sales growth.

Now, we've been talking about the profit potential of traditional marijuana companies for years, but Money Morning Special Situation Strategist Tim Melvin has found a new way to play the sector. 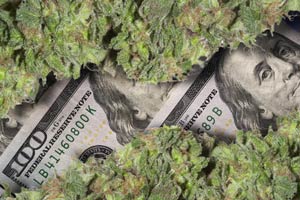 You see, Melvin is always looking for a value.

And although the banking industry has been slow to do business with cannabis firms, he's found two undervalued cannabis banking stocks.

Melvin is a 27-year veteran of the financial services and portfolio management industries.

He's served as a top broker for millionaires for more than two decades. He is considered a top authority on private equity and value investing.

And thanks to Melvin's extensive experience in finance, he uncovered two of the best stocks to play the future $24.5 billion cannabis market.

In fact, it could be your last chance to get in on the ground floor of the weed banking revolution...

The Marijuana Industry Is Getting a Warmer Welcome from Banks

Some form of medical marijuana is legal in 30 states and Washington, D.C., but all marijuana use is still illegal under federal law.

Banks don't want to loan money or service the accounts of cannabis companies.

"Banks have enough regulatory issues to deal with at any given time, and inviting a whole new host of regulatory bodies - including the FBI and other federal agencies - has not been in their best interest," Melvin said on April 20.

"So these private firms have been making a killing helping weed companies raise money, but so far, there hasn't been a way for us regular folks to capitalize on the weed financial services boom taking shape before our eyes," said Melvin.

However, things are starting to change...

Melvin has uncovered two major firms opening up their banking services to the legal marijuana industry.

Best of all, these aren't considered as "risky" as your typical pot stock...

The Two Banks Leading the Way in the Marijuana Revolution

Please tell me what the status is on the following stocks, they seem to be falling and falling: SING, ATTBF and NGTF. Thank you, Robert

I want to participate!

what is happening with bitcoin and litecoin?

How Do I Purchase Cannabis Stock?

I'm on a meager income disability, if I had a few hundred to invest into a marijuana stock how would I go about doing so?

Thanks for reading Money Morning. We have a great deal of information on cryptocurrencies. You can start by looking here.