Legal marijuana sales are expected to skyrocket 145%, from $10 billion in 2017 to $24.5 billion in sales by 2021. Retail investors can still get in early, but many don't like the unpredictability of marijuana penny stocks.

That's why I wanted to reach out to my connections in the cannabis industry and find "backdoor" marijuana stock investments for every type of investor. 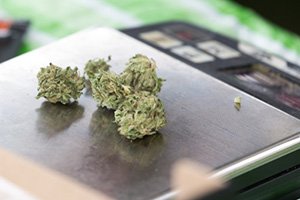 These companies profit from the cannabis industry, but their stock prices are normally less volatile than penny stocks.

And the first two companies our experts told us about have been two of our favorite cannabis plays for a long time...

The first cannabis expert I talked to was Wil Ralston.

He is the president of SinglePoint Inc. (OTCMKTS: SING), a cannabis and technology holding company. SinglePoint specializes in acquisitions of small- to mid-sized companies, with an emphasis on mobile technologies and emerging markets.

With that sort of focus on the cannabis industry, it's no wonder Ralston is plugged into the best profit opportunities.

And it's no wonder he's keying in on two companies we've been recommending as backdoor marijuana plays...

"From Scotts Miracle-Gro Co.'s (NYSE: SMG) investment in cannabis agriculture to Microsoft Corp.'s (Nasdaq: MSFT) partnership with KIND, we're seeing traditional blue-chip companies getting involved in the industry with increasing confidence. As individual states continue to legalize cannabis, we'll likely see this trend continue. Anyone interested in investing in these companies is best served keeping abreast of news developments and watching the almost inevitable growth that occurs for companies willing to take the leap into the cannabis space," Ralston said.

We provided all the details on why SMG and MSFT are the top "pick-and-shovel" plays in the cannabis industry on March 8, and it's good to see Ralston is watching them too.

That makes them less risky to own.

The next person I spoke to about backdoor marijuana investments was Frank Lane. He's the president of CFN Media Group, a leading creative agency and media network dedicated to legal cannabis.

And because of upcoming legalization in Canada, you can't afford to miss what he told me...

What effect will Bill C45 in the US have on marijuana stocks in Canada and the US? Which ones will benefit?

I have read and listen to several of your stories, and yet to have seen where I can invest.

You can use this to find a brokerage account to purchase marijuana stocks.
https://moneymappress.com/brokerage-firms/

how do I INVEST