The Dow Jones today projected a 122-point gain in pre-market trading after McDonald's Corp. (NYSE: MCD) reported very strong quarterly earnings. This morning, the firm reported earnings per share of $1.79, a figure that topped analyst estimates by $0.12. Revenue did decline by 9% year over year, but the $5.14 billion reported still bested Wall Street expectations of $4.98 billion. McDonald's leads a busy day of earnings reports, as markets continue to cheer the best quarterly performance for the S&P 500 in seven years.

As earnings season continues to generate spectacular returns, we recently revisited our "Best Stocks to Buy" list in an efforts to optimize our returns. These stocks are likely to benefit from the changing economic landscape and generate a killer return in the process. Check out our new list here...

Everyone wants a getaway vacation house of their own. But cracking the multimillion-dollar code needed to live the life that you've always wanted is a hard lesson to learn. Until now... America's No. 1 Pattern Trader, Tom Gentile, gives you the tools that will make that dream house a reality. All you need to do is learn one of the market's most important trading secrets. 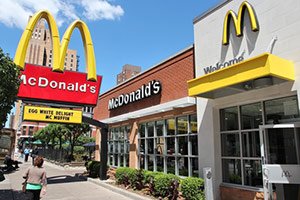