Markets were digesting the raw comments offered by investment legend Warren Buffett over the weekend, who didn't have kind words for cryptocurrencies.

The world famous "Oracle of Omaha" and chair of Berkshire Hathaway Inc. (NYSE: BRK.A) told Yahoo that he doesn't consider cryptocurrencies to be an investment.

"There's two kinds of items that people buy and think they're investing," he said. "One really is investing and the other isn't." 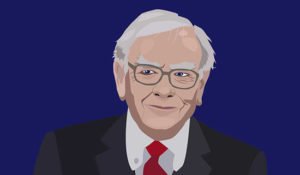 Buffett said that someone who has purchased Bitcoin or other cryptocurrencies cannot generate cash flow like they could from farms, apartments, or small businesses. Buffett said that when it comes to Bitcoin, people are just speculating and gambling.

"If you wanna gamble somebody else will come along and pay more money tomorrow, that's one kind of game. That is not investing."

Here is a recap of the top five cryptocurrencies by market cap as of 11:00 a.m. EDT.

The Top Cryptocurrency Stories for Monday

Michael made a prediction about Bitcoin way back in 2013 - and folks who followed his advice stood to become 253 times richer. I'd venture to say not one in 10,000 people is aware of the massive profit potential unfolding right now.