Pre-market trading in the Dow Jones today indicated slight gains after Apple Inc. (Nasdaq: AAPL) rose 3.4% on better-than-anticipated earnings last Tuesday. The tech giant reported earnings per share (EPS) of $2.73, a figure that beat expectations by $0.04. Revenue of $61.18 billion also beat expectations. Because Apple is the largest stock in the economy based on market capitalization, Apple's stellar returns should provide a significant boost to markets today.

Apple shares have had a bad case of market whiplash recently, as investors react to every rumor coming from Wall Street. The Money Morning team took a closer look at some of the recent negative press around Apple and discovered it's nothing but noise - noise that's distracting investors from a huge profit play. Check out our findings here...

So far in April, Money Morning Chief Investment Strategist Keith Fitz-Gerald has closed out 14 winners already. If you had followed his recommendations so far this year and invested just $2,000 in each winning move, you could already have $36,267 in the bank. What is stopping you from making life-changing wealth in 2018? His latest recommendation is just sitting there waiting. Click here now to learn more. 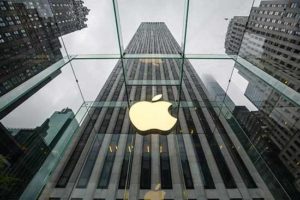