Bitcoin led the global cryptocurrency market back above $500 billion in market capitalization thanks to surprising news from The Goldman Sachs Group Inc. (NYSE: GS).

The banking giant plans to launch a Bitcoin trading desk, sponsoring different investment contracts that are tied to the price of Bitcoin. The bank hopes to eventually trade actual Bitcoin in the future. 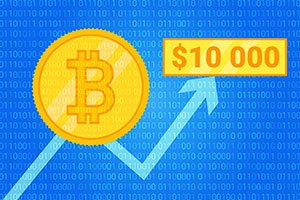 The news has many bulls predicting that the crypto coin will easily return to its all-time high of around $20,000 before the end of 2018.

Here is a recap of the top five cryptocurrencies by market cap as of 2:00 p.m. EST.

He's DONE with Stocks: One of America's top stock trading experts has uncovered a new way to collect thousands of dollars each week - without having to deal with a single disappointing stock ever again. Click here.

Ok just how does one invest in bitcoin? And how to know which one, or the one one wants to invest in?