The price of gold fell to test $1,300 last week, as gold investors scrutinized the latest U.S. Federal Reserve meeting. But it's the dollar's strength that will determine gold prices, and I'll show you exactly why...

The FOMC meeting concluded Wednesday (May 2), and Fed watchers were left trying to decipher the Fed's summary of its decision-making. Its statement introduced the word "symmetric" in an effort to balance interpretations that may seem too "hawkish." 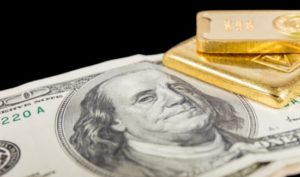 Yes, I know, we're reduced to guessing what message the Fed's trying to telegraph by parsing esoteric word choices.

But analysts seem to agree that the Fed is not anxious to get ahead of inflation.

Inflation has been running above 2% for several months, and that could become a major spark for gold prices.

So could a weakening dollar.

And that makes the next few months pivotal for gold prices. Here's what moved gold prices last week, plus my gold price target for the end of summer...

It was a rough start to last week's gold trading as the dollar extended its rally. The U.S. Dollar Index (DXY) rose from 91.5 to end Monday (April 30) at 91.85, pushing gold back to $1,315 as the markets began anticipating the outcome of the Fed's meeting on Wednesday.

As the DXY climbed further on Tuesday (May 1) to 92.45, gold lost another $12, to close at $1,303. Despite their hit on Monday, gold stocks were unphased by Tuesday's weakness and climbed.

New tax provision could give you the chance to receive checks three times higher than Social Security - click here to learn how you could stake your claim.

That continued again on Wednesday, the day of the FOMC meeting, even as gold climbed only $2.

It certainly gave the impression of a sign of exhaustion for gold stock sellers, suggesting that $1,300 may hold as support for gold. The Fed declined to raise rates, and despite a post-announcement dip, the dollar rose further, to 92.75.

You can see the dollar's rough ride on Wednesday, as traders made sense of the Fed meeting... 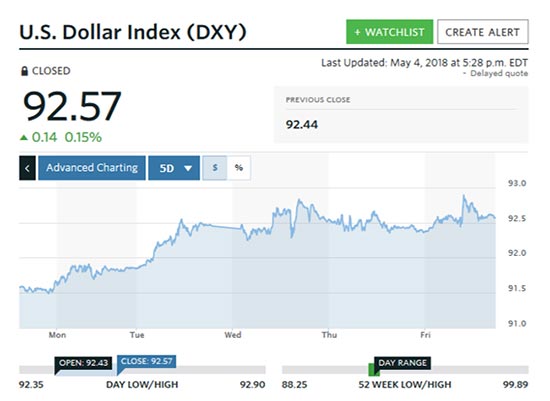 By Thursday (May 3), the DXY was back around 92.5, and gold traders finally digested the Fed's statement, factoring in the expected three more rate hikes this year. Gold prices rose on the day, ending at $1,312.

To end the trading week, the dollar rallied initially on news of the unemployment rate falling further, to 3.9%. Gold popped then dropped back, though ultimately climbed to end the week at $1,315, as the DXY retreated to 92.57.

While the dollar's relationship to the price of gold is no secret, how the dollar's strength moves over the coming months will be the key driver behind gold prices.

Here's how I see it playing out, as well as my latest gold price prediction...

What the Dollar's Strength Will Mean for Gold Prices in 2018