After hitting a distinct bottom early in the last week, silver prices have already bounced back impressively despite ongoing U.S. dollar strength. After starting May near $16.25, the price of silver rallied to a high near $16.47 last week.

The other challenge that silver faced was the news the market awaited from the FOMC meeting on Wednesday, May 2. After the meeting, the committee announced that it would not be hiking interest rates and said inflation continues to move higher.

After peaking on Tuesday, May 1, the gold/silver ratio has quietly begun trending downward once again. I think this is in recognition of silver's underperformance and undervalued state relative to gold. 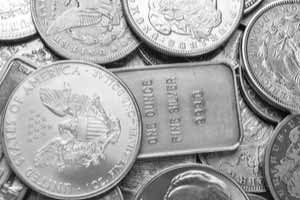 In the near term, the wild card facing silver appears to be the dollar, whose recent rally has weighed on the precious metal.

Despite that stronger dollar headwind, silver appears to be holding pretty steadfast, perhaps gearing up for a seasonal rally of its own…

Silver took a bit of a beating on Tuesday, May 1, as the market looked ahead to the next day, when the U.S. Federal Reserve would announce any possible rate changes. That fired up the dollar, with the U.S. Dollar Index (DXY) running from 91.85 overnight all the way to 92.55 by 11:00 a.m. That was enough to push the price of silver down to $16.07, but it bounced back to close at $16.14.

Here's a look at the past five days of the DXY and the S&P 500, for perspective. 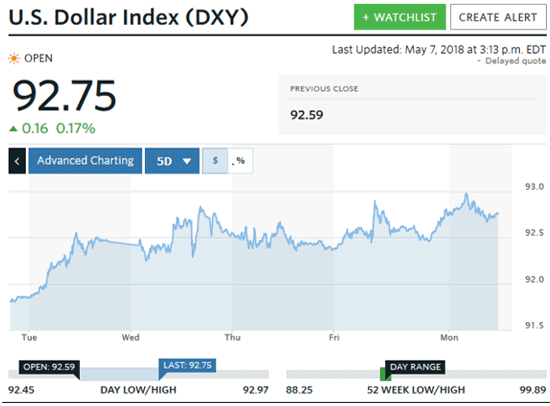 Now that we know what was behind silver's recent rally, here's where I see silver prices heading in both the short and long term…

Here's What's Next for the Price of Silver in 2018