We turned back the clock to this time five years ago to test the performance of the Money Morning VQScore™ tool. What we found is simply astonishing...

If you bought our top-rated stocks in May 2013, you would have made some serious cash.

In fact, if you know of a hedge fund, Wall Street bank, or even your own financial advisor who matched this record, we'd love to hear about it.

And remember, this is just the VQScore's track record for its top-rated stocks (a score of 4 or better) in May 2013. It's produced even more winners since then.

Our analysis from May 2013 found the VQScore tool identified 48 triple-digit winners, including a staggering 2,573% gainer in TAL Education Group ADR (NYSE: TAL). 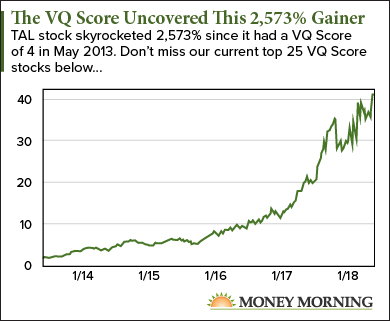 Of course, that isn't the only massive winner...

And the VQScore tool uncovered major profit opportunities more recently than that, too. We ran the data from one year ago - May 2017 - and the results were just as impressive.

Solaredge Technologies Inc. (Nasdaq: SEDG) surged 267% over the last year when it held a VQScore of 4.

SEDG was just one of 52 double-digit gainers found in our VQ Score track record from May 2017 alone.

Again, those are just stocks with our highest scores in May 2017. There are even more double-digit gainers throughout the rest of the year.

We don't know if that's the best track record on Wall Street, but if there's a better one, we can't find it.

It gets even better...

Money Morning readers can access the VQScore system for absolutely no charge. You can sign up for free, right here.

You have one of the most powerful tools in finance completely at your disposal.