Some investors think they missed out on Bitcoin (BTC) because it's too expensive to buy at $7,416.45 a coin.

But you don't have to buy a full bitcoin at a time... 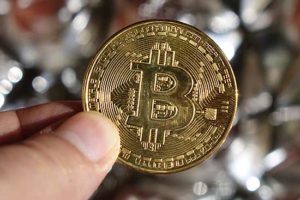 You can buy fractional shares of Bitcoin based on how much you're willing to spend, and those shares will increase in value each time the price of Bitcoin climbs.

That means you can buy as little or as much of Bitcoin as you want and will still profit when BTC prices climb.

Whether you just want to invest a few hundred dollars in Bitcoin or eventually want to own an entire coin, buying fractional shares is the best strategy.

And now may be the perfect moment to buy the cryptocurrency, because its price is poised to soar even higher...

You Can Own One Full Bitcoin Through an Accumulation Strategy

In fact, the price of Bitcoin is trading at a discount right now compared to where cryptocurrency experts see it reaching in a few years...

He didn't provide an exact date, but Standpoint Research founder Ronnie Moas believes the price of Bitcoin will eventually trade between $300,000 and $400,000, according to a December 2017 CNBC report.

Tech visionary John McAfee predicts Bitcoin will trade for $1 million by 2020, an astounding 13,466% gain from the price of Bitcoin today.

If Moas' and McAfee's predictions come true, then today's Bitcoin price will look cheap in comparison.

That's why any Bitcoin price dips in 2018 will allow savvy investors to own a piece of the cryptocurrency at a potentially huge discount.

But timing the market is impossible, which is why cryptocurrency investors can use dollar-cost averaging to get closer to owning a whole Bitcoin.

Through dollar-cost averaging, investors would buy the same dollar amount of BTC each month, no matter the current cost.

Let's say you have a $500 monthly budget for Bitcoin investing.

Sticking to this strategy helps investors avoid the pitfall of buying at a high and selling at a low. And it will allow you to accumulate the crypto until you own a whole bitcoin.

Again, we want to make sure Money Morning readers know Bitcoin should still be viewed as a very speculative investment.

But there's a new innovation that will be like "adding twin turbos to the Bitcoin engine."

Because of this massive profit opportunity, we're sharing the most important details on how to buy your first bitcoin, right now...

How to Buy Your First Bitcoin in 2018