TMUS is a top stock to buy regardless of what happens, thanks to new revenue streams deriving from the buildout of 5G technology.

Don't Miss: These Seven Self-Driving Car Stocks Are Your Ticket to a $2.2 Trillion Market

The Sprint deal would help T-Mobile become a 5G leader. 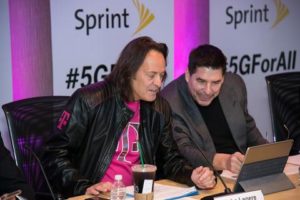 For one thing, the wireless spectrum Sprint owns complements the spectrum T-Mobile owns. The combined company will have both the high- and low-frequency spectrum required to build the strongest network. Such a network would rival Verizon's and AT&T's networks in terms of coverage and signal quality.

A strong 5G network will be key to revenue growth, as it will open up new revenue sources from growth areas such as the Internet of Things (IoT) and virtual/augmented reality.

The combined company would have about 98 million subscribers, compared with Verizon's 116 million and AT&T's 93 million, according to The Wall Street Journal.

Plus, the merger is expected to save $6 billion annually, mostly through elimination of redundancies like cell towers and store locations.

But even if regulators torpedo the deal, T-Mobile still figures to grow earnings at an impressive pace over the next few years.

The company's recent track record shows that it knows how to win in the U.S. mobile market...

What Makes TMUS a Top Stock to Buy Now

T-Mobile has already executed a wildly successful turnaround under the leadership of CEO John Legere, who took over in 2012.

Clever marketing as the "un-carrier" has positioned T-Mobile as the market rogue. The company's aggressive moves, such as eliminating contracts, and unlimited data plans shook up the U.S. carrier market and forced rivals to respond.

The strategy has paid off and is expected to continue paying off.

Another telling metric, free cash flow, was actually negative in 2013 and 2014. By 2015, free cash flow turned positive, reaching $690 million. Last year, it was $2.73 billion - a 295% increase in just two years. Free cash flow is the cash left over after accounting for capital expenditures and is a key measure of a company's financial vitality.

It's no surprise, then, that T-Mobile has earned a Money Morning Stock VQScore™ of 4 - the maximum possible. It's a top stock to buy hands down.

And remember, these projections are based on T-Mobile's performance without the addition of Sprint.

The combined company will deliver much bigger gains if approved...

Why the T-Mobile-Sprint Deal Will Happen

Critics argue the deal won't happen - that regulators won't allow a reduction in carriers from four to three.

But here's why I think regulators ultimately will give the deal the thumbs up.

The main sticking point with regulators is that the reduced competition would be bad for consumers. In other markets, such as Canada, having only three main wireless carriers has led to higher prices and less generous data plans.

Having just three carriers in the United States certainly isn't the ideal outcome, but regulators will need to consider whether preventing Sprint and T-Mobile from linking up will be the best move in the long run.

What the regulators need to consider is whether Sprint will survive long enough to remain a viable fourth alternative.

Ever since Sprint bought Nextel for $35 billion in 2005, the company has struggled with debt. And T-Mobile's success in the market has mostly come at Sprint's expense, making matters worse.

Today, Sprint has over $40 billion in debt against just $26 billion in equity. To compete, Sprint needs to spend billions on 5G infrastructure, adding still more debt. By 2021, Sprint will have $46.7 billion in debt, according to FactSet estimates.

Meanwhile, Sprint will struggle to maintain the payments on that debt. While the company's free cash flow turned positive last year, FactSet estimates say it will go negative again in 2019.

Sprint's interest coverage ratio (a measure of a company's ability to pay the interest on its debt) is 1.12. Higher ratios are better, and anything below 1.5 is considered troubling.

If it remains a standalone company, Sprint could go bankrupt, or it could bleed away customers as it falls behind the other three in the race to deploy 5G.

A weak and faltering Sprint would leave the market with only three viable competitors - not much of an improvement over the three strong players we'll end up with if the Sprint-T-Mobile deal is approved. This might convince regulators the deal, in the long run, won't make much difference to consumers.

Plus, the looming convergence of the cable and wireless industries will add even more competition to the field.

Legere made a reference to this in the press release announcing the deal.

"This isn't a case of going from four to three wireless companies - there are now at least seven or eight big competitors in this converging market," he said.

Legere was stretching it with seven or eight, but at minimum, cable giants like Comcast Corp. (Nasdaq: CMCSA) and Charter Communications Inc. (Nasdaq: CHTR) should join the 5G party in some capacity. The likely addition of such competitors should ease regulators' concerns.

Another thing regulators could do is attach a condition for approval that would require the merged company to spin off a low-cost wireless unit (probably the T-Mobile-owned MetroPCS) to ensure low-income consumers will continue to have affordable options.

The other wild card is the stance of the Trump administration...

U.S. President Donald Trump is generally pro-business but has a Department of Justice (DOJ) prone to shooting down mergers of big communications companies. The DOJ is currently embroiled in a court fight against a proposed merger of AT&T and Time Warner Inc. (NYSE: TWX).

But the Sprint-T-Mobile deal may get a cheerleader in President Trump because of its potential to speed up the deployment of 5G technology in the United States.

A study earlier this year by cellular trader group CTIA found the United States lagging other countries, particularly China, in 5G deployment. A desire by President Trump to prevent China from "beating" the United States in the 5G race could be the biggest factor in getting the Sprint-T-Mobile deal approved.

The New T-Mobile, as the new company will be called, will have the resources to lead the way in the transition to 5G - and, as a result, stands to reap mind-boggling gains.

How 5G Will Make the New T-Mobile a Profit Juggernaut

I’m excited about subscribing!!!
THANK YOU!!!