Bitcoin prices fell another 4.4% on Wednesday morning after a damning report indicated that prices were artificially inflated in 2017.

A University of Texas professor known for flagging suspicious trading activity argues that Tether was used to fuel Bitcoin's record-high price last year. Tether is a "stable currency" that is supposed to be 100% backed by fiat that's held in reserves. 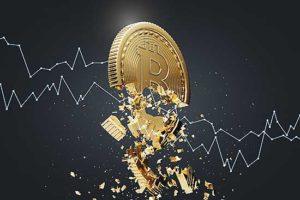 The academic suggests that when Bitcoin prices dropped, entities associated with the crypto exchange Bitfinex used Tether to purchase Bitcoin.

Bitcoin is currently trading at a four-month low.

Here is a recap of the top five cryptocurrencies by market cap as of 11:30 a.m. EST:

The Top Cryptocurrency Stories for Monday

The Crypto Party Is Far from Over: Bitcoin is expected to undergo a massive upgrade – and it could kick off a price surge all the way to $100,000. Cryptocurrency expert Michael Robinson has put together a special report on a unique strategy that could help you pocket one windfall after another not just on Bitcoin, but on all the cryptos he's following now. To get step-by-step instructions on how you could become the next crypto millionaire, click here now…