I want to try a quick relaxation exercise.

This might sound crackpot, but just bear with me for a second.

Let's all take a deep breath, conservatives and liberals alike, and admit, out loud, the one thing that is true, regardless of where you land on the political spectrum.

Say it with me…

The U.S. education system is screwed up beyond what any of us would have thought was possible. 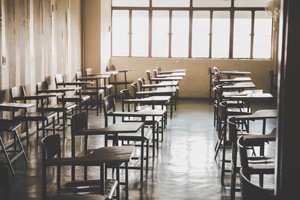 Looking at the results of the Program for International Student Assessment (PISA) tests, we score in the middle of most educational-achievement levels. We once had the best educational system in the world. Now, we're the Oakland Athletics of the global education system – a once-mighty enterprise now lucky to just be mediocre.

The problem has never been a lack of money…

The United States, on average, spends about 30% more per child than the average developed nation. Only Norway, Switzerland, and Austria spend more per kid that we do.

It just seems that the more we spend, the worse it gets. We've been trying to money-whip the education system into line for decades now, and if anything, we're only seeing an inverse relationship grow between money and results.

[URGENT] You could be owed $23,441 in drastically underpaid funds…

But the opposite is true of the education system's fastest-growing area – one that I've been watching like a hawk lately.

In fact, I just found one company in this particular area that's a strong "Buy" right now – and it's set to keep profiting from the fact that the U.S. public school system is, quite frankly, a giant mess…

Public Education Is a Joke, and Our Kids and Teachers Are the Punchline

For years, I helped broker a lot of municipal-bond deals, and that required digging through hundreds of school district bond-offering prospectuses.

Yes, these are often just as boring as they sound. But I highly recommend parsing through your local school board budget every now and then if you really want to get an idea of just how staggeringly wasteful our country's education system has become.

The amount of money poured in at the top and the amount that comes out the bottom in the actual classroom sums up the problem perfectly. Millions in cash are sucked out by an overweight and hyper-productive bureaucracy, and our kids pay the price.

Another part of the problem – and honestly, the most unbelievably infuriating – is the fact that we pay our teachers like serfs.

I saw how the public education system exploits teachers when my daughter was top of her class, won several awards while studying to be a teacher, and received high marks for her teacher-training systems. She worked her ass off for years, and the best offer she received as a first-year teacher was an annual salary less than $30,000.

At the same time, there were hundreds of administrators in the system making over $100,000 annually just to sit in their offices soaking up the benefits of a broken bureaucracy.

We can go on and on about the causes of the problem: the teachers unions' stranglehold on curriculum, standardized-testing issues, and a lack of parental participation, among many, many others. Each is more exasperating than the last.

But the point I want to make is that I truly believe these are problems we can all agree on. My right-wing buddies can find as much to hate in the modern educational system as my liberal wingnut friends can.

Universally, our schools are letting our kids down, and more parents are making the decision to homeschool their kids.

Homeschooling has become the answer to the public education system's failings, and it's already showing up in the numbers. The National Center for Education Statistics reported the number of homeschooled kids in the United States grew from 850,000 to 1.8 million between 1999 and 2012. Since then, the number has easily surpassed 2 million.

Make no mistake: there's a lot of money to be made from homeschooling's growing popularity.

And those of us willing to sit toward the front of the classroom can position ourselves to make a killing from this trend.

Here's How We'll Make Money from the Advent of Homeschooling