Gold prices took another beating last week, but sentiment may have finally hit an intermediate-term bottom. That was actually predictable, and it could make right now one of the best buying opportunities you'll see...

The precious metal will often mark a low sometime around a Fed rate hike. This time, it may be as much as a week later. 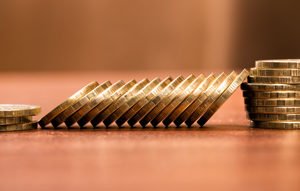 We have the bounce in the dollar on the fear of trade wars and a "hawkish" Fed to blame. This past Wednesday, Fed Chair Jerome Powell said the U.S. jobs picture was not especially tight, setting the stage for gradual rate hikes to keep inflation and economic growth in check.

The U.S. Dollar Index (DXY) made another big push this week, taking the DXY all the way to 95.5 before correcting.

Add to that increasing calls for gold's demise, with worries about the "death cross" chart pattern and the metal's lack of a "safe-haven" response to market risks, and you have a perfect storm of "hate" on gold.

That sentiment punished gold, but it has likely laid the groundwork for the price of gold to return to rally mode.

You see, gold has an amazing way of soaring, often dramatically from lows, when everyone who wants to sell has sold, leaving buyers to take charge.

Here's why gold prices have reached their bottom and why the coming rally could send prices soaring right to my latest gold price prediction...

Why We've Reached a Bottom for Gold Prices

Gold had already started out on Monday (June 18), then followed on Tuesday (June 19) with weakness, thanks to a surge in the DXY that took the index from near 94.5 rapidly higher to 95.25 in a matter of hours. From there, it pulled back to 95, but the damage to gold was done.

Here's the DXY over the past week... 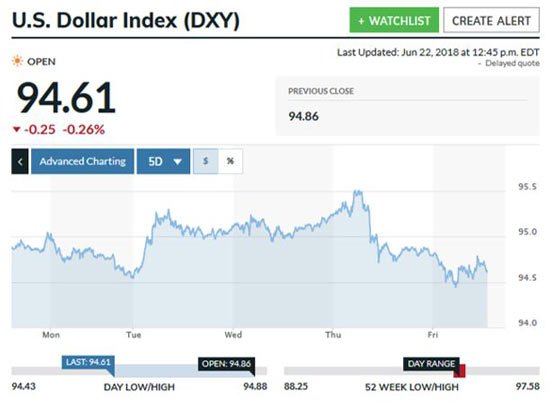 On Wednesday (June 20), gold dropped further to $1,267 along with the Dow, which lost 400 points at its worst that day. Powell's comments that the jobs market would not preclude maintaining a gradual pace of interest rate hikes weighed on gold.

Then on Thursday, the greenback backed off but maintained firmness with U.S. bond yields. That's when it looks like gold may have hit its bottom, testing $1,260, then quickly rebounding to $1,269 before closing at $1,267. 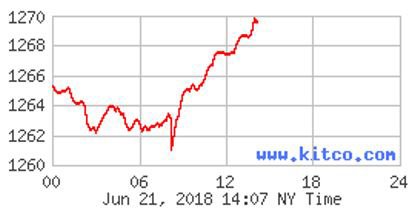 That's why I'm seeing the possibility for a big breakout for the yellow metal...

How High This Gold Price Rally Will Go