Yesterday, I talked about the incredible strength in consumer-discretionary stocks, as represented by the Consumer Discretionary Select SPDR ETF (NYSE Arca: XLY) – that’s the best “one-stop shop” play on the power of the U.S. economy.

And, even better, I gave you an easy trade to “juice” what should be already impressive gains there.

But I also hinted that I was wrapping up some “Best in Breed” analysis on two overlooked stars.

They’ve been eclipsed by XLY heavyweights like Amazon.com Inc. (Nasdaq: AMZN) and Netflix Inc. (Nasdaq: NFLX), but only because the companies that put the “F” and “N” in “FANG stocks” get all the attention.

Trust me: The stocks I’m about to name are not shy in the profit-making department. In fact, one of them just threw off a quick 67% profit for my Night Trader subscribers who were following along.

But we’re nowhere near done…

This Is Doing More Than 6x Better Than XLY Itself

TripAdvisor Inc. (Nasdaq: TRIP), the online travel review and booking site, is the company that treated my subscribers so well. And I think it’ll do the same for you, too.

Yesterday, I showed a relative-strength chart of XLY blowing away the S&P 500.

MARKETS TANKED but Chris’ readers got the chance to score winning 40.42% gains on CSCO and 32.93% on SKT – on top of last week’s double- and triple-digit wins. Click here to learn more…

In the same vein, the chart below shows TripAdvisor crushing XLY’s impressive performance in 2018. The stock is up a whopping 65% (much better than Amazon, by the way) so far this year, compared to the XLY’s 10.5%. 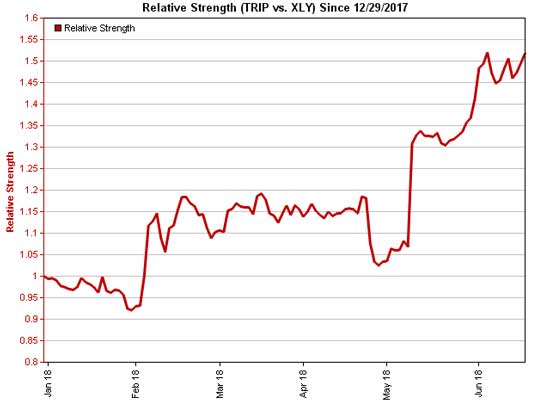 Interestingly, TripAdvisor experienced a similar pullback in May before racing higher to hit a succession of new highs nearly every day.

The thing I really love about TripAdvisor, though? You guessed it: short interest.

Not only is that above my threshold for a short squeeze kicking in, it also is the highest ratio among all XLY stocks. And we’re talking about the second-best performer in XLY in 2018, behind only Netflix.

Negativity is also seen on the Street, as just one of 25 covering analysts rate TRIP a “Buy” – just one.

I don’t know what chart those guys are looking at. Maybe they’ve been on vacation (booked through TripAdvisor). But, whatever the reason, analyst upgrades have to start flowing in at some point, which will give the stock even more of a boost.

My second play is on a stock that is currently open in Seismic Profits Alert. It’s on apparel manufacturer Hanesbrands Inc. (NYSE: HBI). Unlike TRIP, Hanes is lagging XLY in 2018 performance, having gained less than 5% this year.

But I’m not looking at the whole year; I’m focused on the past two months, during which the stock has rallied as much as 38%.

In the process, the shares have raced past all potential moving average support and are now set to challenge their 2018 high above the $23 level. More importantly, the 50-day moving average is now in a strong uptrend, a signal my “Best in Breed” system keys on for bullish plays.

Hanes is facing similar skepticism to TripAdvisor, with the short-interest ratio registering a robust 8.0. This clearly makes Hanes vulnerable to a short-covering rally. And fewer than half the covering analysts consider Hanes a “Buy,” leaving ample room for upgrades.

This has been a great week to be a “Best in Breed” investor; we’ve seen it identify weak stocks to short and incredibly strong stocks in strong sectors to get long on.

And, even better, the system doesn’t give a damn about the headlines, either, so it’s great at uncovering under-loved and overlooked stocks that do as well (or better) than the marquee names.

Way Too Many People Missed Out on This

U.S. stocks took a vicious beating on Monday – indices were slammed with the biggest one-day drops for months – double- and triple-digit losses across the board, as the VIX "fear gauge" rocketed 25%. Of course, this much was on the news…

If you got those alerts, there's nothing you need to do. You're set. But… if you missed out, you'll want to click here to learn more about how Chris' system works…

Hi, Chris. Thanks for this analysis. What are your requirements for exiting these trades? I'm currently sitting on a "best in breed" call for MRK that you recommended, which is currently down over 35%. It would be great if you could include some of the strategy for exiting your recommendations, even if you aren't willing to send an actual "get out now" to Money Morning subscribers.