Apple stock is widely considered the gold standard of the high-tech era. 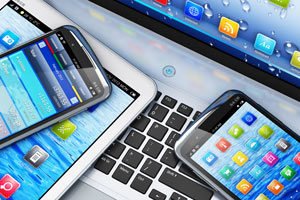 Unfortunately, that success does come with one drawback: It's difficult to repeat.

No matter how successful its next gadget is, Apple stock is probably not going to double or triple in the next couple years.

But that's where today's stock comes in.

You can still get those big returns from investing in Apple's hardware. But instead of looking at, say, the iPhone X itself, we're looking at the company behind the smartphone's OLED screen technology.

OLED stands for "organic light-emitting diode," and it is hands-down a higher-quality option than the LCD screens that once dominated smartphones, tablets, computers, and TVs. Now that the production costs are coming down, OLED is starting to become the standard for all those devices.

So for the company that's been developing this technology since the mid-1990s, the profits are rolling in.

We'll tell you how to join in on the fun below. But first, let's look at what makes this technology so much better.

OLED vs. LCD: One Crystal-Clear Winner

Last year CNET did a side-by side comparison of existing LCD TV screens and the upstart OLED screens. The newer technology proved superior in a number of ways:

Those are the key advantages when it comes to viewing quality, but OLED is also considerably thinner than LCD: a 15-mm LCD screen can be replaced by an OLED screen of just 4 mm, making your phone or tablet that much smaller and lighter for it.

OLED also emits less UV light. Excessive exposure to UV light can accelerate age-related macular degeneration and other vision problems. That's something we don't think about now, but it could become a major issue for heavy device users in the next couple of decades.

Thanks to new phosphorescent technology (PHOLED), OLED is energy-efficient, too. When the developer of PHOLED licensed the technology to Samsung Display Corp. Ltd., it increased the efficiency of the OLED display in Samsung's Galaxy S4 smartphone by 25%.

That developer, based in New Jersey, is the company that's been able to bring OLED technology into the mainstream. And now that OLED's time in the sun has come, its leading developer has become a top pick for big profits over the next few years.

To Profit from OLED Technology, Go Right to Its Source