But when it comes to cashing in on the global auto market, we're steering clear of Tesla and piling into another car stock…

In an email sent to Tesla employees the afternoon of the achievement, Musk stated that be believed Tesla has finally become a "real car company." 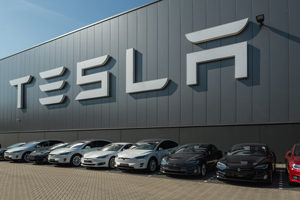 Wall Street certainly agreed – following the news, investors poured money into what's widely been hailed as the car manufacturer of the future.

However, this attitude is missing the bigger picture – and the more substantial profits.

You see, Tesla's real profit potential isn't in electric cars. In fact, it isn't in auto manufacturing at all…

Tesla Is the Energy Company of the Future

According to Keith, the fact that Musk "is involved in so many things is precisely the attraction here and why savvy investors would be wise to pay attention. Musk wants to redefine the electric grid and, with it, the world's energy supply."

In other words, Tesla's future lies in the design, production, and distribution of an international energy company.

And Tesla is already aggressively pursuing its future as an energy provider. In 2015, Tesla announced the launch of the Tesla Powerwall, a home battery product. Tesla describes the Powerwall as a "rechargeable lithium ion battery with liquid thermal control" that can last nearly two days during a power outage.

In May 2016, Tesla began accepting preorders for "solar tiles" – solar panels that could be installed as roof tiles on homes.

This was followed by Tesla's acquisition of one of Musk's other ventures, Solar City, an industrial manufacturer that specializes in the production of solar energy devices. Over the last two years, Tesla has used Solar City's manufacturing base to increase production of the company's solar panels and make large-scale distribution a reality.

A recent report from Bloomberg revealed that Tesla's efforts are paying off – Tesla recently partnered with Home Depot to install 800 selling spaces in the home improvement company's stores. The areas, staffed by Tesla employees, will demonstrate the daily capabilities of Tesla's solar panels and the Powerwall to prospective customers.

These energy developments not only overshadow Tesla's breakthroughs in the auto industry – they demonstrate that the company's future is in revolutionizing how people access and consume energy.

In fact, Tesla's big win amounted to producing 5,000 vehicles over five days, but serious automakers achieve that level of production in mere hours.

And one of these companies is on the verge of redefining the American auto industry and making a killing in the process.

It's taking on the largest auto market in the world – China's 22.8 million annual sales – with a lineup of five new car models for 2018 in a plan to boost revenue from China by 50%.

Plus, it currently boasts a perfect Money Morning Stock VQScore™ of 4, indicating that it's a prime buy for the savvy investor.