In the big picture, President Trump's tariff policy is having a significant impact on global trade. According to UK-based research firm Oxford Economics, a full-blown trade war will chop global trade by 4% -- the equivalent of $800 billion. 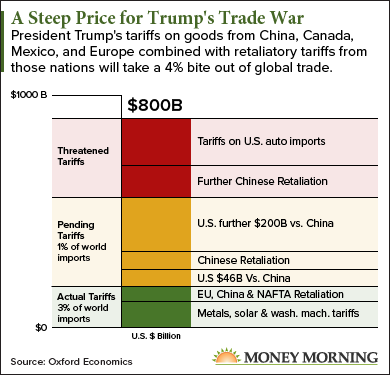 "Recent tariff threats, if realized, would extend high tariffs to over 4% of world imports - a tenfold rise," Oxford lead economist Adam Slater wrote in the report. "This comes just as the global upturn shows signs of faltering. The threat to world growth is significant: in a scenario of escalating tariffs, our modelling suggests world GDP could be cut by up to 0.4 percentage points in 2019."

President Trump is confident the tariffs are the right way to go - in March he tweeted "trade wars are good, and easy to win." But as I warned back in 2015, a tariff-heavy trade policy is likely to do more harm than good.

And the costs to Americans are already adding up...

Meanwhile, the new tariffs are going to raise the prices of hundreds of common products here in the United States...

Unfortunately, there isn't much you can do about rising prices. But you can take action to protect your investments...