Defense stocks are in focus Friday as tensions between the Trump administration and Iran surge to new heights. 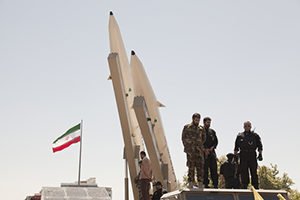 ABC reported that both British and Australian intelligence agencies were helping the U.S. military identify targets for a bombing campaign. The reports emerged just days after U.S. President Donald Trump sent an all-caps tweet that threatened war against the Islamic Republic.

The tweets were in response to a speech by Iranian President Hassan Rouhani.

It's important not to dismiss this story as an empty threat by the Trump administration.

After all, both U.S. Secretary of State Mike Pompeo and U.S. National Security Advisor John Bolton have both called for strikes against Iranian nuclear facilities in the past.

If you're looking for the top cybersecurity stock of 2018, look no further.

With global cybersecurity crime expected to hit $6 trillion each year by 2021, this is the stock to own.