The Internet of Things (IoT) is no longer a secret. In fact, by the end of 2016, 62% of Americans owned at least one IoT-connected device.

And while the tech "spotlight" may be on IoT investments, we've found three IoT stocks (one that's completely under the radar) with tremendous profit potential.

Before we get to the stocks, it's important to realize just how revolutionary the Internet of Things is...

IoT refers to any piece of technology that has the ability to connect to the Internet and/or another IoT device, including cell phones, coffee makers, headphones, and wearable devices like smart watches. 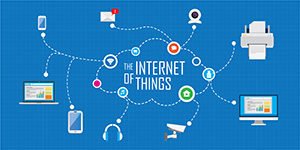 There are 7.6 billion people on Earth, and our population is only estimated to reach that 11.2 billion number by 2100.

By 2020, the number of IoT-connected machines is expected to reach 30 billion devices and $3 trillion in spending, according to the International Data Corporation.

That $3 trillion in spending will create a massive profit opportunity for a select group of tech stocks.

Now, here are two of the most popular ways to play the growing IoT market. Plus, we'll show you a completely under-the-radar pick in this industry...

2 of the Most Popular IoT Stocks on the Market Today

Nvidia Corp. (Nasdaq: NVDA) is well-known as a CPU and GPU maker. CPUs are essentially the brains of computers. GPUs are specialized chips for rendering images, animations, and video for computer screens.

GPUs are critical for artificial intelligence platforms that make the Internet of Things useful, and Nvidia supplies the technology they require.

If successful, NVDA's GPUs specializing in AI could be purchased by even more companies. That means more revenue for the company and profits in your pocket.

Analysts have an average price target of $275.57 on NVDA shares, which represents 11% upside from here. That may be conservative.

Analysts expect NVDA to increase earnings another 58% this year and anticipate a jump of 34% for revenue year over year.

As a long-term investment, any dip in the NVDA stock price should be viewed as a buying opportunity.

MRVL specializes in data storage, network infrastructure, and wireless-connectivity solutions, all necessary for the Internet of Things to work.

We like Marvell because it recently opened an electromagnetic compatibility (EMC) lab to implement its cloud IoT technology on the connected-car industry.

MRVL is using the EMC lab to build a portfolio of connectivity chips that target fast-growing automotive applications.

Over 125 million cars with embedded connectivity will be purchased over the next five years, according to Counterpoint Research.

Analysts have an average price target of $27.27 on MRVL shares, which represents 26% upside from here.

With a VQScore of 3.75, Marvel is a solid buy with room left to run to the upside.

While both of those companies are excellent ways to play the industry, this next play has by far the highest profit potential.

And this IoT stock continues to fly under the radar...

MU has been trading between $50-$60 a share since March. Not seeing the 52% increase based on Analysts estimates of $52.50. I think this report was originally written in January.