One of our most reliable predictors of recessions is trending in a dangerous direction. It's happening right now, even as you read this.

This indicator has signaled before each of the last seven recessions, going all the way back to 1969.

That includes the Great Recession of 2007, the recessions following the dot-com bubble crash in 2001, and the 1973 "stagflation" crisis.

Now, it's just about to signal again.

In fact, some experts - like Joe LaVorgna, the chief economist for Natixis - predict it will hit by October.

But you don't have to be blindsided by what's about to happen. We know what this signal means, and we know how to prepare for it...

How the Fed Can Cause the Next Recession

An inverted yield curve is a surefire predictor of a coming recession.

When the yield curve inverts, it means the yields on long-term bonds fall below the yields of short-term bonds, the opposite of what's normal.

Investors are rewarded with a higher yield on long-term bonds than short-term bonds because they have to wait years for them to reach maturity. That's exactly what we'd expect when the economy is healthy.

But when investors start to worry about the economy, they buy long-term bonds to protect themselves from the threat of market turbulence.

If the economy collapses, so will the stock market, and it makes sense for investors to seek safer assets like bonds. This drives up long-term bond prices, and it pushes yields down.

Take a look at how the yield curve has flattened over the last year and a half in the chart below. You can see how short-term yields have risen, while long-term yields have remained steady, thus the red line (today's line) is much flatter than the green line (from 18 months ago). 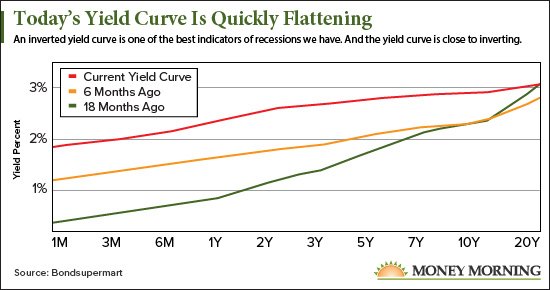 As you can see, the yield curve is rapidly flattening, and the Fed can accelerate it by hiking interest rates. That might be enough to invert the yield curve by the end of this year.

When the Fed hikes interest rates, the new Treasury bonds will pay a higher interest rate than existing bonds, sending yields up on short-term bonds.

You see, when the Fed slashed interest rates in 2008, dropping them from above 5% to a mere 0.25%, the lowest rates ever, it was meant to help stimulate economic growth. It also helped send stocks soaring more than 240% from March 2009 to today.

With the Fed hiking interest rates in a hurry, investors know that less money will be flowing into the market, a sign of a slowing economy.

And when Wall Street's pessimism has lined up with a hawkish Fed, it has forecast a recession seven times in a row.

Fortunately, you don't need to be stuck holding the bag when the next recession hits.

We've uncovered a way to make money without touching a single share of a stock, which means you'll be raking in profits while the rest of the investing world is panicking...